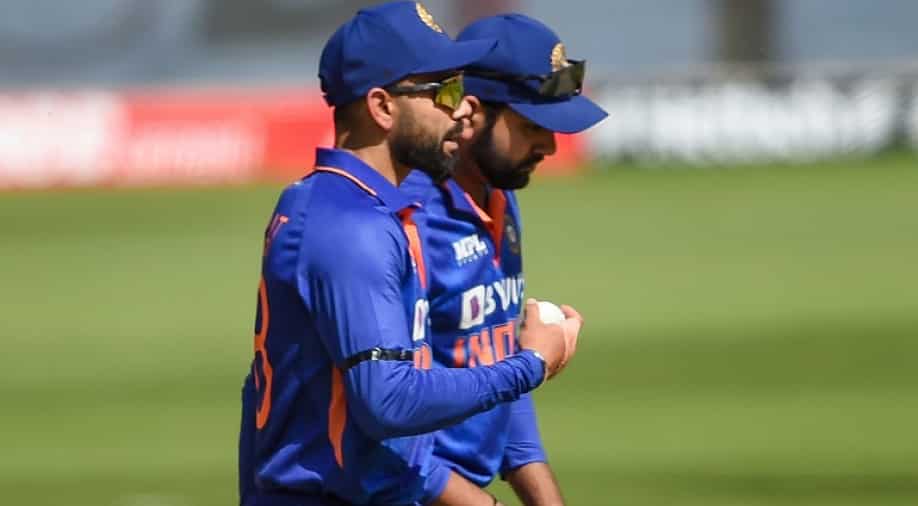 Rohit Sharma defended Virat Kohli and backed him to bounce back amid his lean patch. Photograph:( AFP )

Indian skipper Rohit Sharma responded to Virat Kohli's critics and backed the superstar batter to bounce back from his ongoing lean patch in international cricket.

Indian captain Rohit Sharma responded to Virat Kohli's critics in a firm fashion during the press conference ahead of the upcoming T20I series between India and West Indies. The two teams will lock horns in the first T20I of the three-match rubber on Wednesday (February 16). After completing a 3-0 whitewash in the ODIs, India will be looking to get off to a winning start in the T20Is.

Ahead of the first T20I between India and West Indies, captain Rohit Sharma addressed questions from reporters surrounding Kohli's ongoing lean patch for the Indian team across formats. Kohli had a below-par campaign in the ODI series against West Indies as he managed to score only 26 runs in three matches. The former India captain, who has not scored an international century since November 2019, has seen pressure mounting on him to bounce back to form.

When asked about Kohli's poor form, Rohit snapped back at the reporters and took a dig at the media urging the journalists to 'keep quiet for a while'. The Hitman said Kohli is in a great mental space and said he knows how to handle pressure having played international cricket for over a decade now.

"If you guys can keep quiet for a while, I think he'll be alright," Rohit told the reporters at the presser.

"He is in a great mental space. He has been a part of this team for more than a decade. Such a player knows how to handle the environment and pressure. If you guys can keep it quiet for a bit, everything will fall in place," he added.

Ahead of the start of the T20I series against West Indies, BCCI on Tuesday confirmed the appointment of wicket-keeper batter Rishabh Pant as the vice-captain of the Indian team in the absence of KL Rahul. Rahul will miss the series due to an injury and in his absence, Pant will act as Rohit's deputy in the three-match series.

Earlier, Ruturaj Gaikwad and Deepak Hood had been included in the Indian T20I squad as replacements for injured KL Rahul and Axar Patel for the upcoming series against West Indies.