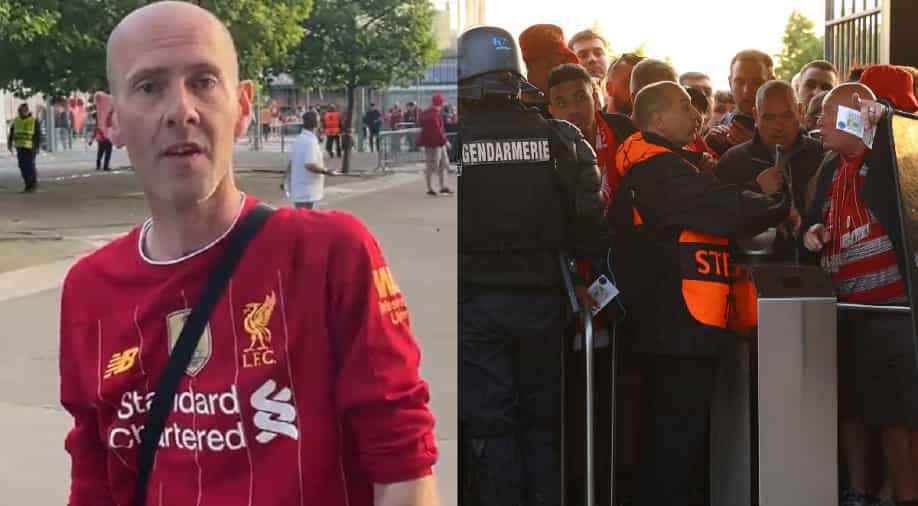 A Liverpool fan was separated with his brother during chaos ahead of UCL final. | Photo - Twitter/AFP | Photograph:( Others )

A Liverpool fan was separated from his brother and was left devastated during the chaos outside the Stade de France ahead of the Champions League 2021-22 final between Liverpool and Real Madrid.

Liverpool fans were left dejected and shaken after horrific scenes outside the Stade de France ahead of the Champions League final between the Reds and Real Madrid. Thousands of Liverpool supporters had travelled to Paris from England to watch their club go up against the La Liga giants in a bid to lift their seventh Champions League/European Cup title. However, many of them were left stranded outside the stadium in Paris after chaos broke out just minutes ahead of kick-off.

The start of the final was initially delayed by 15 minutes due to the chaos outside the stadium. However, the game had to be delayed once again due to a mismanaged entry process and hundreds of fans with fake tickets trying to enter the stadium. There were chaotic scenes outside the end allotted to the Liverpool fans.

The French riot police had to be called in to take control of the situation. As per reports, the police officers were seen using pepper spray and tear gas against the Liverpool fans. Many Liverpool fans were left fearing for their safety as they remained stuck outside with the final minutes away from kick-off.

Some genuine ticket holders were also denied the opportunity to enter the stadium as a result of the chaos. While there were reports of pepper spray being used even against children, a Liverpool fan was left shattered after his brother went missing during the chaos.

The Liverpool fan had come to watch the final with his brother but didn't want to enter the stadium anymore after being separated from him.  "I am in a European Cup final which is one of the biggest moments of your life - come to a European Cup final. I came here with my brother and I have lost my brother. I don't know where he is and I don't know whether I will see him again," he was heard saying in a video shared by a journalist on Twitter.

"I stood outside there (the gates), it's huge crowd, it's Hillsborough-like. I was almost in tears walking in here and I don’t want to watch this European Cup final now. I just want to go home. I have not seen my brother, I don't know when I am going to see him again," the fan said further almost on the verge of breaking down.

“I was almost in tears walking in here, I don’t want to watch this European Cup final now. I want to go home.”

This man says he can’t find his brother and wants to go home after what he’s witnessed this evening at the Stade de France. #UCLfinal pic.twitter.com/7lYS2iBfZ9

Another Liverpool fan, who travelled to Paris to watch the final with his nine-year-old son, revealed his son was left horrified due to chaos outside the stadium and was crying his eyes out. The fan said French police were brutal against the fans which left his son shaking.

"I’m not very good,” Reds supporter Nick said after the game. I’m with my nine-year-old son. He saw tear gas being used against fans, we were there two hours before the game," the fan told Talksport.

"The police were kicking off, he’s physically shaking with fear. He’s nine-years old and I can’t stop him from shaking. He’s crying his eyes out," he went on while breaking down in tears.

Liverpool lost the final against Real Madrid 1-0 after Vinicius Junior's goal in the second half proved to be the difference between the two teams. It was an enteratining contest between the two European giants but the final was marred with controversies and choas outside the stadium.