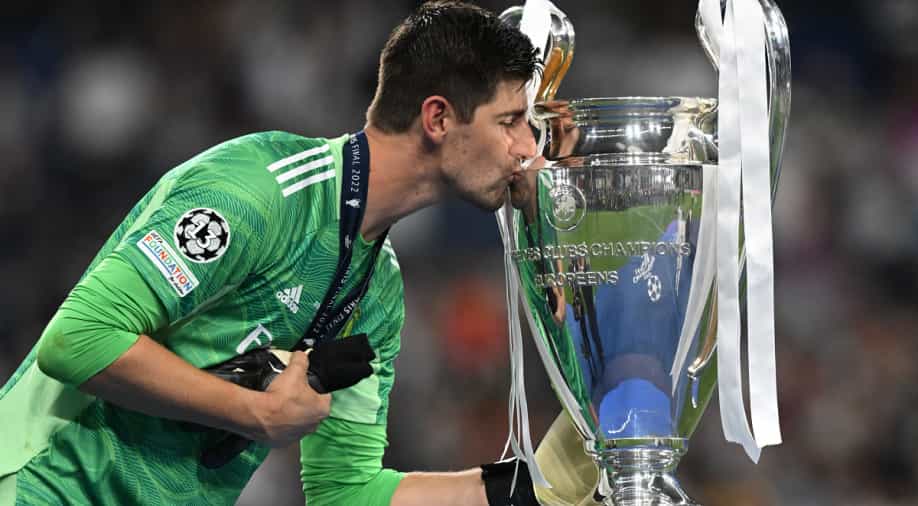 Thibaut Courtois was one of the best players for Real Madrid in the UCL 2021-22 final. Photograph:( AFP )

Real Madrid goalkeeper Thibaut Courtois responded to his critics in style after the Los Blancos went on to defeat Liverpool in the final to clinch the Champions League 2021-22 title on Sunday.

Real Madrid defeated Liverpool 1-0 in the final to clinch the Champions League 2021-22 trophy in Paris on Sunday (May 29). It was yet another clinical performance from the Los Blancos on the biggest stage of them all as they proved why they remain one of the best teams in Europe. Vinicius Junior scored in the 59th minute to put Real Madrid ahead in the final and seal the deal for the Los Blancos as they went on to lift their 14th Champions League/European Cup title.

While a number of Real Madrid players impressed on the pitch in the final, it was goalkeeper Thibaut Courtois who came up with a top-notch performance between the sticks. Courtois was sensational throughout the summit clash and made as many as nine saves during the game to keep Liverpool at bay.

The Real Madrid keeper made a stunning save in the first half to deny Sadio Mane, who almost put Liverpool ahead with a brilliant strike in the 21st minute. The Belgian keeper continued his fine show in the remainder of the game and showed why he is regarded as one of the best goalkeepers in the world at present.

Courtois also sent out a message to his critics after Real Madrid's memorable triumph as he asked fans in England to put some respect on his name. Courtois had joined Real Madrid from Chelsea in 2018 and has seen been criticised by many for his average goalkeeping. However, the Belgian shut his critics in style with his performance in the Champions League final against Liverpool on Sunday.

“When Real Madrid plays finals, they win them. I’m on the right side of history. I saw a lot of tweets coming my way, saying I will be humbled. It was the other way round," Courtois told BT Sport after the final.

“I needed to win this final for my career, for all the hard work I put in, and to put some respect on my name," he added.

Also Read: Klopp is confident that Liverpool will come back stronger; tells Reds fans to 'book hotel' for next UCL final

Courtois also heaped praise on his teammates for Real Madrid's brilliant season and hailed them for putting up a fine performance in the final on Sunday. Real Madrid have had a fantastic season winning the La Liga and the Champions League titles.

“I saw a lot of criticism after a great season that I was not good enough or whatever. I’m just really proud of the performance of the team. I think I played a great game today and that was the difference. We had one chance and we scored it," Courtois added.