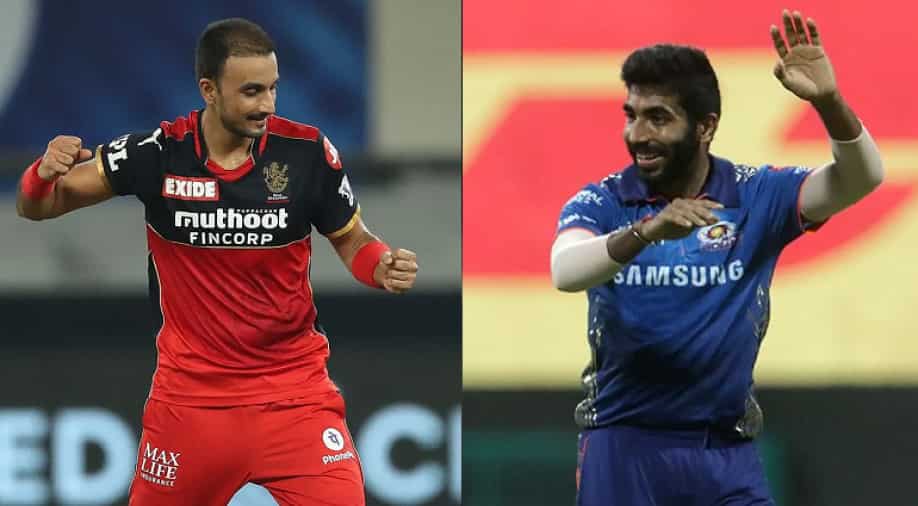 Harshal Patel and Jasprit Bumrah were among highest wicket-takers in IPL 2021. | Photo - IPL | Photograph:( Others )

Royal Challengers Bangalore (RCB) pacer Harshal Patel equalled Dwayne Bravo's record for most wickets in a single season of IPL with his 32 scalps in IPL 2021. Here is a look at the top five highest wicket-takers of the season.

Harshal Patel took the Indian Premier League (IPL) 2021 season by storm with his performances for Royal Challengers Bangalore (RCB). Traded from Delhi Capitals (DC) ahead of the start of the season, Harshal turned out to be the unexpected hero for RCB as he played a key role in helping the Virat Kohli-led side secure a spot in the playoffs for a second successive season.

The 30-year-old enjoyed a dream run with the ball in IPL 2021 and finished as the leading wicket-taker of the season with 32 wickets from 15 matches at a brilliant average of 14.34. He also equalled Dwayne Bravo's record of most wickets in a single season of IPL.

Besides Harshal, Delhi Capitals pacer Avesh Khan was another uncapped Indian bowler who impressed with his heroics in IPL 2021. Avesh bowled extremely well and outshone the likes of Kagiso Rabada and Anrich Nortje to finish as the leading wicket-taker for Delhi Capitals, who made it to the playoffs once again this year.

Here is a look at the top five highest wicket-takers of IPL 2021:

Harshal Patel had played only five matches and got just three wickets last season with Delhi Capitals before being traded to Royal Challengers Bangalore (RCB) where he scripted an incredible turnaround. Harshal went on to become a vital cog in the RCB line-up and took everyone by surprise with his bowling heroics. He picked up a staggering 32 wickets in 15 matches to finish as the leading wicket-taker of IPL 2021, including a hat-trick against Mumbai Indians. He also equalled Dwayne Bravo's record of most wickets in a single season of the IPL.

Another uncapped Indian pacer who impressed this season. Avesh Khan had a tremendous season for Delhi Capitals and finished as their best bowler with 21 wickets to his credit in 16 matches. Despite having the likes of Kagiso Rabada and Anrich Nortje among others in the side, Avesh was DC skipper Rishabh Pant's go-to bowlers in pressure situations and delivered almost every time. He finished on the second spot in the list of highest wicket-takers in IPL 2021 with 24 wickets.

One of the best bowlers in the IPL over the last few years, Bumrah might not have been at his lethal best this season but was among the wickets yet again. He was the most prolific bowler for Mumbai Indians, picking up 21 wickets in 14 matches for his team at an economy of 7.45. He finished third on the list of highest wicket-takers in IPL 2021.

Chennai Super Kings star Shardul Thakur bowled numerous game-changing spells for MS Dhoni & Co. in their title-winning campaign. Shardul enjoyed a stellar season with the ball as he picked up 21 wickets in 16 matches for CSK. He played an instrumental role in helping his team claim their fourth title with a victory over Kolkata Knight Riders in the final and finished fourth on the list of highest wicket-takers of the season.

With 19 scalps to his name, Mohammed Shami was the highest wicket-taker for Punjab Kings in IPL 2021 and the fifth overall. The Indian pacer looked in great rhythm ahead of the T20 World Cup 2021 and will be hoping to continue his fine form for Team India at the showpiece event in the UAE.