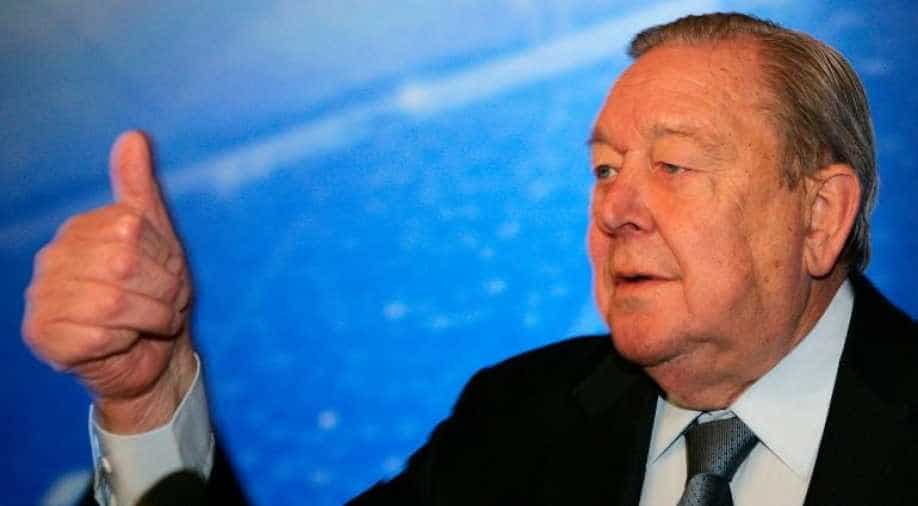 Johansson, president of European football association UEFA from 1990 to 2007, was a driving force behind the formation of the Champions League

Lennart Johansson, a Swede who presided over European soccer for 17 years as its new Champions League turned into a global commercial juggernaut, has died after a short illness aged 89, Sweden's Football Association said on Wednesday.

Johansson, president of European football association UEFA from 1990 to 2007, was a driving force behind the formation of the Champions League, giving the continent's top club competition a new identity, a catchy anthem and worldwide reach.

"World football will always be grateful to him for all he has achieved for the beautiful game," UEFA President Aleksander Ceferin said in a statement.

The Swedish FA said Swedish football was in mourning.

Johansson took over the top job in European football at a turbulent time when money from television coverage was flooding into the sport and players gained complete freedom to move between countries and clubs in Europe.

"It was not a given that UEFA would be successful in meeting all these dramatic changes," the Swedish FA said.

"The Champions League became an enormous success, but Lennart Johansson's other major achievement was finding a fragile balance between the big clubs' demands and the needs of the broader football family," SFA added.

Johansson ran against Swiss Sepp Blatter to head football's world governing body FIFA in an acrimonious vote in 1998 but lost.

Blatter, who led FIFA for 17 years, is now serving a six-year ban from football for unethical conduct.

The men remained rivals. The Swedish FA quoted Johansson as saying, "It is my 20-year fight with Blatter that people like."

Blatter's successor at FIFA, Gianni Infantino, who worked earlier in his career under Johansson at UEFA, called the Swede "a friend and an invaluable source of wisdom and inspiration".

"Lennart has always been a role model of professionalism and, more importantly, of humanity," he said.

In 2007, Johansson stepped down as UEFA president after being beaten in an election by former France international Michel Platini.

Johansson was given the title honorary president, a role which he took seriously, even attending meetings in his wheelchair.

Johansson was a lifelong supporter and honorary president of Stockholm club AIK.