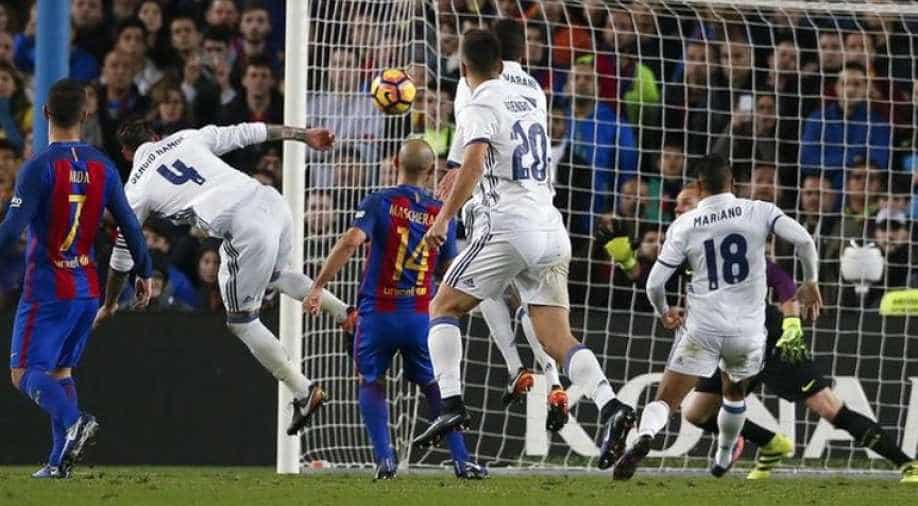 Barca coach Luis Enrique deployed the same team that he said produced the worst display in his tenure to draw 1-1 at Real Sociedad last week and they struggled to prise open an organised Real side. In photo: Ramos scores his goal. Photograph:( Reuters )

Sergio Ramos again proved Real Madrid's last-gasp hero by heading a 90th-minute equaliser to force a 1-1 draw at champions Barcelona and preserve his side's six-point lead at the top of La Liga on Saturday.

Zinedine Zidane's team looked set to lose their 32-game unbeaten run in all competitions after Luis Suarez climbed highest to head in Neymar's free kick in the 53rd minute in a 'Clasico' that failed to live up to its billing early on.

Neymar then curled a shot just over the bar after a breathtaking run into the box while Andres Iniesta and Lionel Messi narrowly missed the target for the hosts.

Real captain Ramos earned a point that could prove decisive in the title race by powering in Luka Modric's free kick, just as he had done in the 2014 Champions League final against Atletico Madrid.

"We did everything we could to take the three points. We were the superior team but if you don't take your chances this is what happens," Suarez said.

"We have to stay strong, keep going and hope Real drop points here and there. There's still a long way to go."

Barca coach Luis Enrique deployed the same team that he said produced the worst display in his tenure to draw 1-1 at Real Sociedad last week and they struggled to prise open an organised Real side.

Visiting winger Lucas Vazquez had a penalty appeal waved away in the third minute when he went down under a challenge from Javier Mascherano while Barca called for a spot kick at the other end when Sergi Roberto’s shot was blocked by Raphael Varane.

Suarez's header opened up the game and Barca went all out to try and kill off their rivals.

Neymar sliced open the Real defence but put too much power into his shot while substitute Iniesta shot into the side netting after magnificent play from the Brazilian.

Real took their time to offer a response but upped their pursuit of an equaliser as the game wound down. Ramos headed over the bar and Cristiano Ronaldo had an effort cleared off the line by Jordi Alba.

Just as Barca thought they had got away with it, however, Ramos had the final say.

"We had more chances in the first half and lacked effectiveness but hard work is always rewarded and we still have a big advantage," said Ramos.

Real are top with 34 points from 14 matches while second-placed Barca have 28. Atletico Madrid can move to within a point of the champions when they host Espanyol later on Saturday.

Third-placed Sevilla missed the opportunity to take advantage of the 'Clasico' draw as they suffered a shock 2-1 defeat at Granada who recorded their first league win of the season.