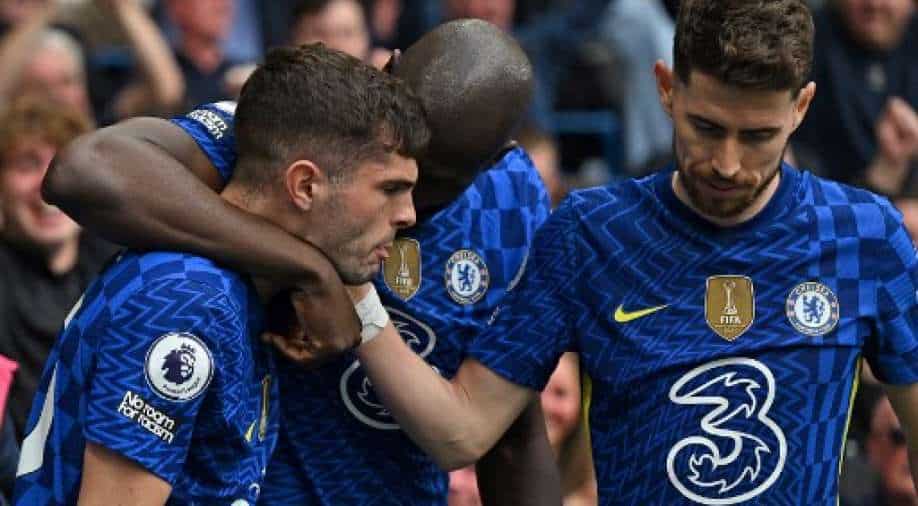 Pulisic, who entered as part of a triple substitution by Chelsea in the 76th minute, converted a cross from Marcos Alonso with a first-time finish off his left foot into the bottom corner at Stamford Bridge.

US forward Christian Pulisic came off the bench to score in the 90th minute and earn Chelsea a 1-0 win over West Ham that consolidated third place in the Premier League on Sunday.

Pulisic, who entered as part of a triple substitution by Chelsea in the 76th minute, converted a cross from Marcos Alonso with a first-time finish off his left foot into the bottom corner at Stamford Bridge.

That goal spared the blushes of Jorginho, who struck a tame penalty at West Ham goalkeeper Lukasz Fabianksi in the 87th minute after his trademark hop-and-skip run-up. Craig Dawson brought down Romelu Lukaku for the penalty and was shown a red card after VAR looked at the incident to check there was contact in the area.

Chelsea moved five points clear of fourth-place Arsenal, which won 4-2 at Stamford Bridge on Wednesday to intensify the fight for Champions League qualification. Chelsea has played one game more, though.

West Ham rested key players like Declan Rice and Michail Antonio ahead of its appearance in the Europa League semifinals on Thursday.

Pulisic has struggled to get starts in Chelsea's team in recent weeks, with Thomas Tuchel preferring a front three of Timo Werner and Mason Mount either side of Kai Havertz.

"(Pulisic) had a period when he was on a run, had the confidence, was heavily involved up front and Timo had to wait for many, many weeks," Tuchel said.

Also read | 'If it can happen in Pakistan': PSL team owner's absurd remark on Umran Malik

"Puli struggled a little bit since coming back from the international break (in March) where he had three matches ... And time zones to cope with. From there he struggled energy-wise, this was my impression, on and off the pitch. It's sometimes like this.

"Now we have tried to bring him back in full confidence from the bench and I am happy with the effort today and I am happy he had the chance to have this big impact with (other substitutes) Romelu and Hakim (Ziyech)."

Tuchel said on Friday that his players are "fragile," tired and running short of ideas on how to fix their ailing home form. A dismal first half devoid of any invention or quality backed that up.

Chelsea was without injured defenders Antonio Rudiger and Reece James.