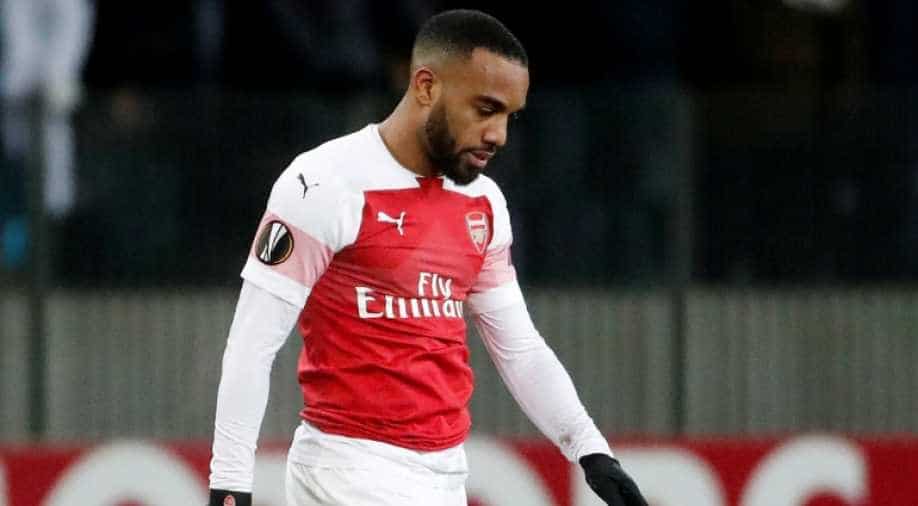 Unai Emery's side have now won just two of their last nine away matches -- last weekend's victory over the Premier League's bottom club Huddersfield and a FA Cup win against third-tier Blackpool.

Chelsea claimed a 2-1 victory at Malmo in the Europa League last-32 first leg on Thursday to ease some of the pressure on beleaguered coach Maurizio Sarri, while Arsenal suffered a shock loss to BATE Borisov.

Away side Chelsea desperately needed a response after back-to-back humiliating away losses, with last Sunday's 6-0 thrashing by Manchester City following a 4-0 reverse at Bournemouth.

Ross Barkley took advantage of a defensive lapse by the home team to put Chelsea ahead on the half-hour mark, with Olivier Giroud adding a 58th-minute second before Malmo's late goal gave them a glimmer of hope ahead of next week's return match at Stamford Bridge.

Sarri named a strong team, although he did leave Gonzalo Higuain and Eden Hazard on the bench.

Chelsea found themselves up against a spirited Malmo outfit in the first half, roared on by a vociferous home crowd, but kept the Swedes at arm's length before Barkley grabbed their first away goal of 2019.

Pedro swung over a cross which Lasse Nielsen should have headed away, but the defender failed with his attemped volleyed clearance and Barkley was on hand to control and stab into the net.

Uwe Rosler's Malmo piled on the pressure at the end of the half, but Barkley twice produced crucial headers at the other end to keep Chelsea in front.

Malmo continued to push Chelsea back after the restart, with David Luiz flinging himself to his right to head Arnor Traustason's shot past the post.

But the Premier League giants took total control of the tie in the 58th minute with a wonderful counter-attack.

Barkley led the charge before picking out Willian, and the Brazilian powered to the byline before cutting the ball back for Giroud to flick in a cool back-heeled finish.

The French striker has now scored five goals in six Europa League games this season, despite only netting once in 23 matches in domestic competitions.

But Malmo did grab the goal their efforts deserved in the 80th minute, as Anders Christiansen slotted past Chelsea goalkeeper Kepa Arrizabalaga.

Arsenal face an uphill battle to progress after a 1-0 defeat by BATE in a game which saw Alexandre Lacazette sent off for elbowing Aleksandar Filipovic with five minutes remaining.

Stanislav Dragun put BATE ahead just before the break in Barysaw and Arsenal never threatened an equaliser, with Lacazette's late dismissal also ruling him out of next week's second leg in London.

Unai Emery's side have now won just two of their last nine away matches -- last weekend's victory over the Premier League's bottom club Huddersfield and a FA Cup win against third-tier Blackpool.

Elsewhere, Napoli began life without record goalscorer Marek Hamsik with a 3-1 win in a fiery atmosphere at FC Zurich.

Lorenzo Insigne, who has replaced Hamsik as captain after the Slovakian's move to China, scored the opening goal, with Jose Callejon and Piotr Zielinski also on target.

Celtic's European adventures appear to be over for another season after being outclassed 2-0 by Valencia at Parkhead.

Denis Cheryshev and Ruben Sobrino got the goals as the Spaniards extended their recent unbeaten run to six matches.

Inter Milan claimed a 1-0 win at Rapid Vienna despite Mauro Icardi snubbing the trip after being stripped of the captaincy over a contract row, with Lautaro Martinez scoring the winner from the penalty spot.

Wissam Ben Yedder's 22nd-minute strike helped record five-time winners Sevilla take a large step towards the last 16 with a 1-0 victory over Lazio in Rome, while Benfica backed up their 10-0 weekend thumping of Nacional by winning 2-1 at Galatasaray.

Salzburg, semi-finalists last season, lost 2-1 at Club Brugge, while 10-man Sporting Lisbon were beaten 1-0 by Villarreal in the Portuguese capital.