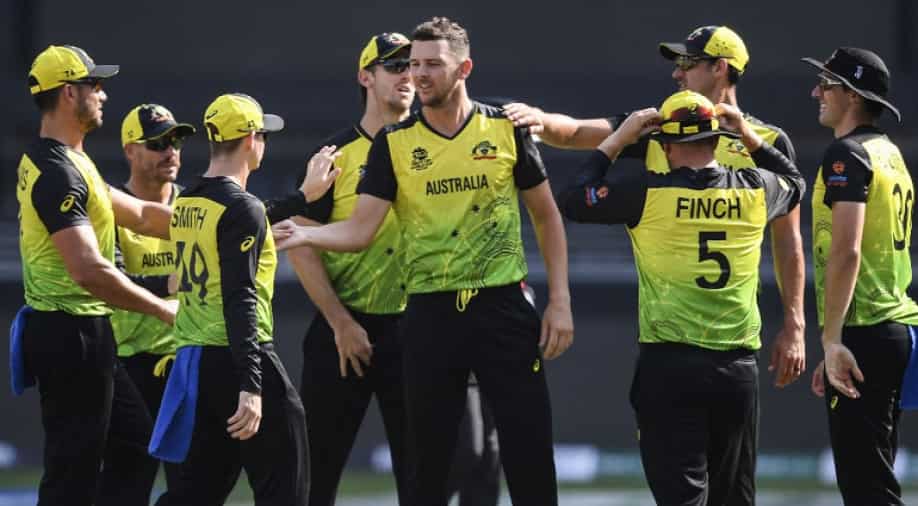 Australia will lock horns with West Indies in their final Super 12 game on Saturday. Photograph:( AFP )

Australia will take on West Indies in their final Super 12 clash in the ongoing T20 World Cup 2021 on Saturday (November 06). A loss might hurt Australia's chances of finishing in the top two and securing a spot in the semi. Here is the prediction for the game.

A spot in the semi-final will be on the line for Australia when they lock horns with West Indies in their final Super 12 clash at the ongoing T20 World Cup 2021 on Saturday (November 06). Australia have so far won three for their first four matches and are one win away from securing a spot in the top two to make it to the next round.

A loss against West Indies might prove fatal to their chances of qualifying for the semi-finals as South Africa are breathing down their neck with the same number of points in their bag and a game in hand. If Australia lose against West Indies and South Africa win their final Super 12 game against England, the Proteas would finish second in the group and qualify for the semis.

Currently, Australia are in a stronger position to make it to the next round even if South Africa manage to beat England in their last group game as Aussies have a much better net run rate of +1.031 compared to South Africa's +0.742, who will have to register a huge win if they are to surpass Australia even if Aaron Finch's men beat West Indies.

Australia haven't played their best cricket so far in the T20 World Cup this year but still, stand only one win away from qualifying. However, the same can't be said about West Indies, who were everyone's second favourite at the start of the tournament but have had a miserable campaign so far.

Sri Lanka thrashed West Indies by 20 runs in their fourth Super 12 clash on Thursday (November 04) to end their hopes of finishing in the top four. Despite having extraordinarily firepower in their batting line-up and some brilliant experienced all-rounders in their squad, Windies have only managed one win in four matches so far in the tournament.

Adam Zampa picked up a five-wicket haul as Australia defeated Bangladesh comprehensively by eight wickets in their last game and will be heading into the West Indies clash on a confident note. The Aussies have their fate in their own hands as they would need a win to ensure they can consolidate their second spot on the points table.

West Indies have dominated Australia in T20Is when it comes to head-to-head record between the two sides with 10 wins in total 16 meetings against each other. However, in this year's T20 World Cup, West Indies have not been the side they are known as and have massively underperformed. Aussies might start as favourites against them and will look to give their all considering it will be their las bid for a spot in the semi-finals.