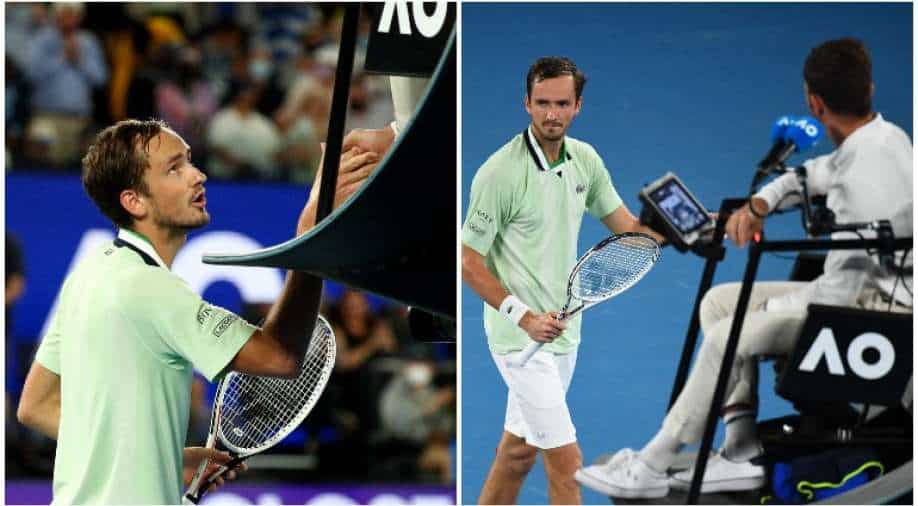 During the clash, Tsitsipas was receiving coaching instructions at regular intervals from his father, who was present in the stand. Thus, this irked Medvedev. The Russian lost his cool and fumed at the chair umpire. Watch Video:

On Friday (January 28), the two semi-finals of the men's singles took place in the Australian Open, in Melbourne. While Rafael Nadal beat Italy's Matteo Berrettini in four sets, Russia's Daniil Medvedev went past Greek player Stefanos Tsitsipas to setup a riveting final face-off with the Spaniard.

Medvedev produced a near flawless performance versus Tsitsipas, winning 7-6(5), 4-6, 6-4, 6-1 in a high-quality match. While the Russian was challenged by the runners-up of the last year's French Open, the 2021's US Open champion Medvedev had all the answers against Tsitsipas to proceed to the finale.

“Oh my God, how can you be so bad in the semifinal of a Grand Slam? Look at me! I’m talking to you!" said Medvedev. At this point, the umpire Jaume Campistol intervened and responded by asking, "What do you want?”

Medvedev continued saying, "To give him coaching [violation] because his father is talking every point. “Do you understand Greek? Next time it should be a code violation because he’s speaking Greek. If you don’t, you are a - how can I call it - small cat.” Here's the video of Medvedev's rant:

"If you don't call it, you are a small cat?"
"Medvedev vs Tsitsipas pic.twitter.com/WS7yPXJGtb

Medvedev will now gear up to face Nadal in the summit clash. He had earlier denied World No. 1 player Novak Djokovic from winning a record 21 Grand Slam titles during the US Open final last year. This time around, the Russian will be eager to stop Nadal from setting an all-time record of 21 Grand Slam titles. At present, Nadal, Djokovic and Roger Federer remain tied at 20 Grand Slam titles each.