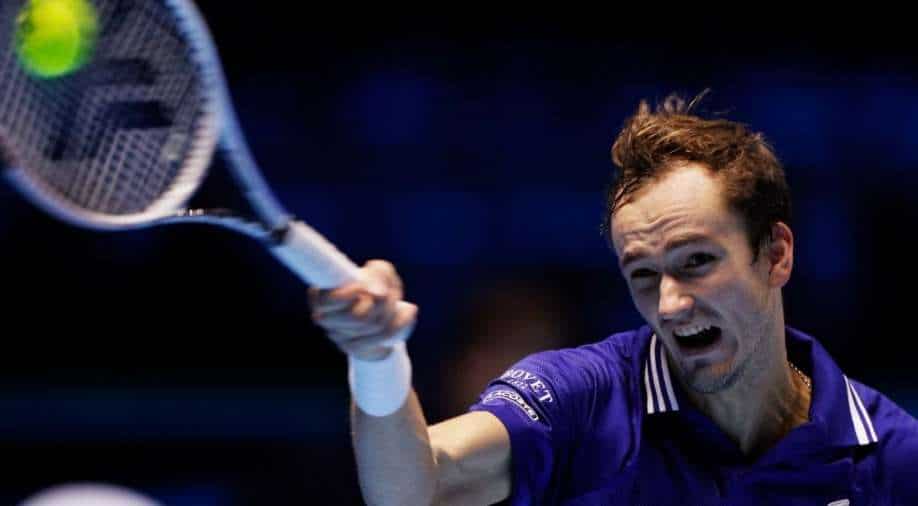 Denis Shapovalov and Felix Auger-Aliassime won their respective singles matches in the evening session to power Canada past Germany in Group C into the semi-finals and a Saturday meeting against the Russians.
Poland will take on Spain in the first semi-final on Friday.

World number two Daniil Medvedev beat Italian Matteo Berrettini in the singles and then returned to the court to clinch the deciding doubles and fire defending champions Russia into the ATP Cup semi-finals on Thursday.
Denis Shapovalov and Felix Auger-Aliassime won their respective singles matches in the evening session to power Canada past Germany in Group C into the semi-finals and a Saturday meeting against the Russians.
Poland will take on Spain in the first semi-final on Friday.

A depleted Russia, who beat Italy in last year`s title match, came into the $10 million tournament without fifth-ranked Andrey Rublev and world number 18 Aslan Karatsev after both tested positive for COVID-19 in the lead-up to the team event. In a winner-takes-all final Group B tie, Italy took the lead through Jannik Sinner`s 7-6(6) 6-3 win over Roman Safiullin but Medvedev staved off a fight back from world number seven and Wimbledon finalist Berrettini to win 6-2 6-7(5) 6-4 and level the tie.

"The first set I was in control and it`s tricky because you think that things will continue to go your way but that`s not the case when you`re up against a top 10 player," U.S. Open champion Medvedev said. All four players returned for the decisive doubles at Ken Rosewall Arena and it was the Russian pair of Medvedev and Safiullin who emerged triumphant, taking a final set super tiebreak 5-7 6-4 10-5.

This year`s ATP Cup has featured 16 teams, with the four group winners proceeding to the semi-finals.
Daniel Evans and Jamie Murray rallied to beat Americans Taylor Fritz and John Isner 6-7(3) 7-5 10-8 in the deciding doubles to hand Britain a 2-1 win and keep alive their hopes of winning that group. Evans picked up his third straight singles win at the tournament by taking down big server Isner 6-4 7-6(3). Fritz then forced the tie into a deciding doubles after beating Briton Cameron Norrie 7-6(4) 3-6 6-1.

Britain needed Germany, led by Alexander Zverev, to defeat Canada in the final group tie to help them clinch the last semi-final spot, but it was not to be. After Shapovalov beat Jan-Lennard Struff 7-6(5) 4-6 6-3 in the opening singles to give Canada the lead, 11th-ranked Auger-Aliassime stunned world number three Zverev 6-4 4-6 6-3 to seal the contest.

ALSO READ | Want to feel like every time I step on court I'm having fun, says Osaka on return post 4-month break

It was Auger-Aliassime`s first career win against a top-five player and will be a timely boost to his confidence with the year`s first Grand Slam starting from Jan. 17 in Melbourne. "It feels good to beat Zverev," Auger-Aliassime said in his on-court interview. "I played a great match. He is a great player and he has beaten me a couple of times before, so I am happy I was able to get the job done today, especially for the team."