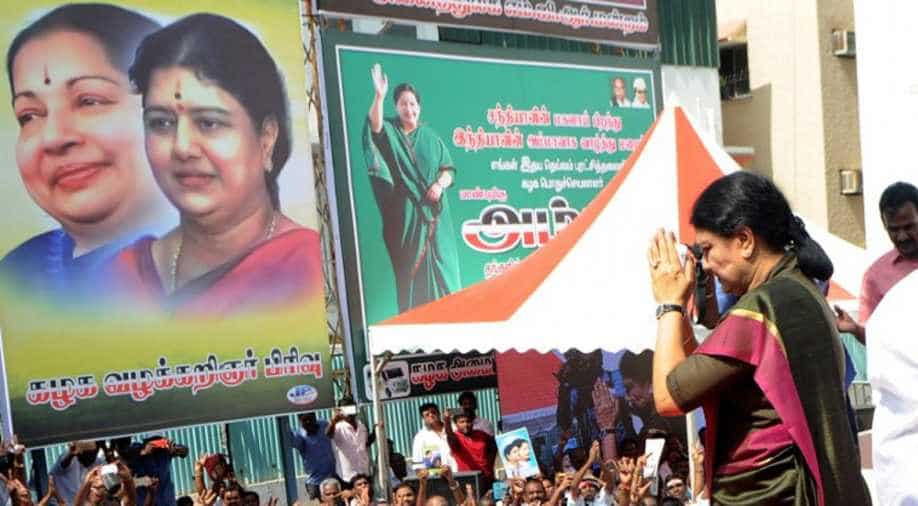 Sasikala, a shadow of Jayalalithaa for nearly three decades, is set to become the chief minister of Tamil Nadu. Photograph:( AFP )

A Public interest litigation(PIL) has been filed in the Supreme Court seeking to restrain swearing-in of AIADMK leader VK Sasikala as Tamil Nadu chief minister.

However, the Madras University Auditorium, which had earlier hosted the swearing-in of late chief minister Jayalalithaa, was being reportedly spruced up for the occasion, while apparently awaiting the court directive. A senior AIADMK source told PTI that all arrangements were in place in the event of the ceremony taking place tomorrow.

Meanwhile, the Supreme Court has asked the Karnataka government to wait for one week for the verdict on batch of pleas challenging the acquittal of the late Tamil Nadu chief minister Jayalalithaa in a disproportionate assets case, also involving AIADMK leader V K Sasikala.

A bench headed by Justice P C Ghose asked senior advocate Dushyant Dave to wait for one week after he made a mention before it regarding the delay in pronouncement of the verdict.

Dave said that they have been waiting for the judgement for quite some time and requested the bench to pronounce it soon. The apex court had last year, before the demise of Jayalalithaa, reserved its verdict on a batch of petitions challenging the order of her acquittal of the Karnataka High Court.

Sasikala, a shadow of Jayalalithaa for nearly three decades, is set to become the chief minister of Tamil Nadu as the AIADMK legislature party yesterday elected her as its leader, over a month after she became the party's powerful General Secretary.