Delhi pollution: My city is killing me, softly 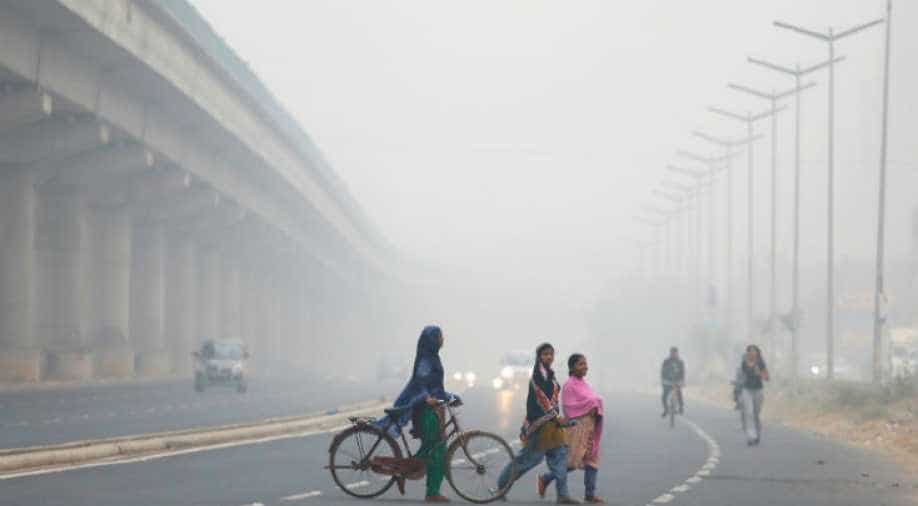 It has many names. It descends annually. It stalks and descends slowly covering every nook and corner of my city. Once it’s there you know the beast has arrived. It is insidious but unpretentious as it is always on your face. It is silent but visible. Like a hug which slowly smothers you.

In the past, homes and offices acted as fragile but workable borders but this time they too gave away like sand castles on a beach.

The silent killer envelopes the city like mother’s love covering all and sundry. From the sky, the beast looks even more fascinating. Still but working effortlessly and nibbling away our insides slowly. The beauty of the beast is that it just doesn’t discriminate.

It is also mysterious in its origin. No one knows as to who is responsible for its coming. Some in past suggested that it was pre-ordained but rest continue to blame everyone for its becoming. So, the talk remains a conversation or like a whisper but never an outrage.

I think we all have an idea of what is eating our flesh gently.

I often ask myself as to why we have failed to beat the beast? Is it the lack of will? Or, are we uninformed about its anatomy? I don’t think so. I think we all have an idea of what is eating our flesh gently.

The beast has been unbearable and selfish this year. It incapacitated a lot of people. Victims had to rush to buy the best protection. Though some were plain faint hearts. They collapsed and passed away. Quickly.

Misery also creates good business opportunities. Two of my friends did well. They ended up making a good money. Last, I heard that left for La La Land with their children. I hate them for their entrepreneurship. They were smart enough to invest in the industry of precaution where new and better coping mechanisms are being designed. It is collaborative and remains profitable. I have also been told that it will continue to grow.

Perhaps, my despair stems from the fact that I cannot escape as quickly as I want. I cannot fight it. It cannot be fought alone. That’s the shield of the beast.

Sometimes it also gives you relief from the drudgery of the world. For hours, it makes shanties in front of my multi-story apartment disappear. Though I can smell the dirty shanty town. Obviously, the beast also has a chink in its armour. It can make ugly things disappear temporarily but cannot hide the stench.

So, I often take little chances by immersing myself in his shadow. It smells slightly acidic. Obviously not like rotten eggs but bearable enough to remind me of my childhood of a different entity, a more benign one, which would descend on us on yearly basis. It had a similar look but spared us. Like a separated, civilised twin.

We all fail to agree on a strategy to beat the shit out of it.

Those were yesteryears. In the past, everyone knew with winter comes the fog. There was no panic or little precaution. But these days we all have to brace ourselves, waiting anxiously for its twin to spare us. We all fail to agree on a strategy to beat the shit out of it. It is not as if the ‘us’ isn’t concerned but it doesn’t motivate anyone to remove the head from the monster’s body.

Relief is that no one dies immediately. It begins with a gentle cough. It persists like a heartbeat to turn itself into a different creature inside you. Though many similar cases have been reported.

Those who ultimately die have millions of things to blame upon unlike the other types of malevolences where a finger can be pointed. Last year in a nearby hospital, a lot of women died because of dirty syringes. The doctor got lynched. There is no one to lynch here. I suppose it is impossible to lynch your-self and suicide is illegal in my country.

Then the city I live in has a robust democratic tradition. We all agree to disagree. Last Diwali, I couldn’t even convince my aunt to ensure a Green Diwali.

Since everyone is complicit it doesn’t make great politics either. There no one person to blame.

Half the population believes that neighbouring settlements, with their cars and crops, high-rises and power plants, feed the beast. In passing the blame they deny their complicity in the act.

Since everyone is complicit it doesn’t make great politics either. There no one person to blame.

Somehow it ends up becoming a debate on everything else. Last year we all decided to stay home and bid time. Then, US election happened,  leaving us feeling much worse than this nasty creature masquerading as velvet sheet. Fortunately, with sudden rain, the beast vanished in few days. We all cheered as the despair melted away. It was back to business as usual.

For the next time, I will rush to the forest when the insidious arrives. If the woodlands succumb to sprawling cities, and the beast comes knocking there too, I would run away to another hole.

As it has been accepted that it is better to escape than fight. I have also chosen to escape.

But if the smog does get me, then I would pray that it does me in my sleep. As it has done for many.