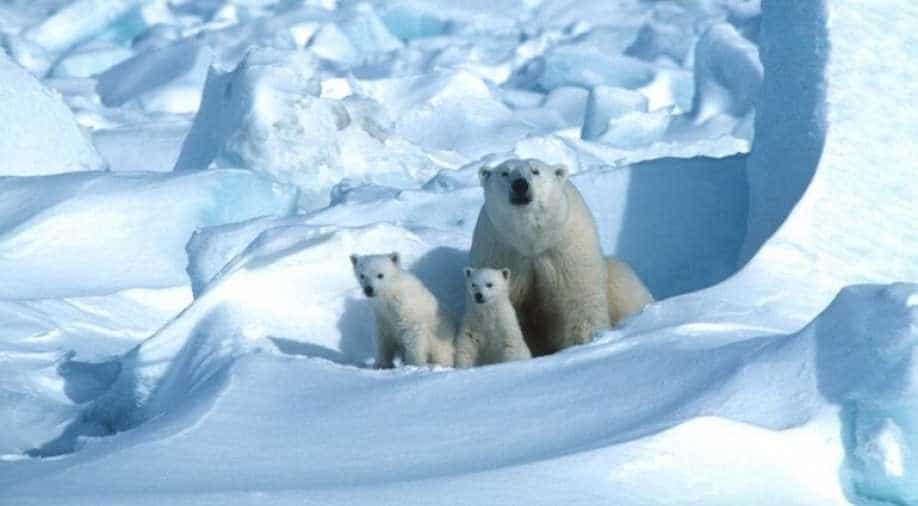 A handout photo made available on July 17, 2020 by Polar Bears International shows a polar bear with its cubs in the Sea Ice, northeast of Prudhoe Bay in Alaska in 1985 Photograph:( AFP )

If greenhouse gas emissions are not controlled soon, all polar bears except a handful few in the Arctic will be gone over the course of time leading upto 2100

Polar bears may be gone by 2100, a new trajectory followed by scientists has revealed. They additionally found how and where the extinction will take place.

If greenhouse gas emissions are not controlled soon, all polar bears except a handful few in the Arctic will be gone over the course of time leading upto 2100.

The scientists asserted that by 2040, the bears will be unable to reproduce, which will cause sporadic local extinctions in colonies. The study, published in Nature Climate Change takes a look at how the animals will be affected primarily attributing it to climate change.

Also read: Should cow burps be blamed for global warming?

If the emissions go on uninterrupted, by the end of the century, the bears will only survive on the Queen Elizabeth Islands, which falls in Canada’s Arctic archipelago.

However, we are already at a point of no return. Even if the effects of global warming are reversed and contained, the polar bears in the Arctic will be unable to reproduce by 2080. 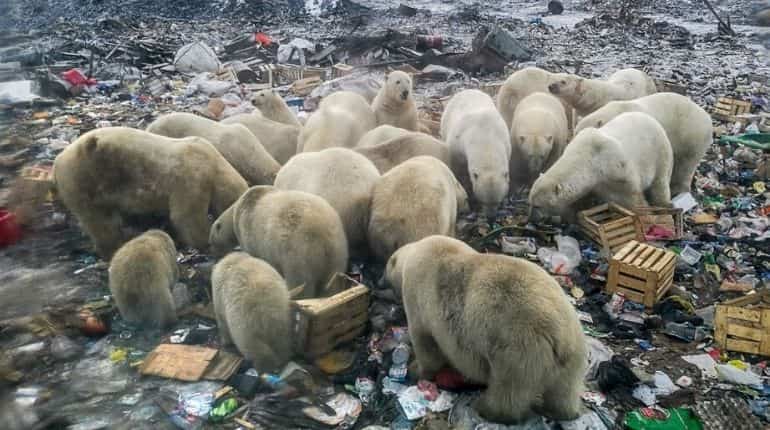 This file photo taken on October 31, 2018 shows polar bears feeding at a garbage dump near the village of Belushya Guba, on the remote Russian northern Novaya Zemlya archipelago, a tightly-controlled military area where a village declared a state of emergency in February after dozens of bears were seen entering homes and public buildings. Climate change is starving polar bears into extinction, according to research published on July 20, 2020 that predicts the apex carnivores could all but disappear within the span of a human lifetime. In some regions they are already caught in a vicious downward spiral, with shrinking sea ice cutting short the time bears have for hunting seals, while dwindling body weight undermines their chances of surviving Arctic winters without food, scientists reported in Nature Climate Change. The study calculates "timelines of risk" for different polar bear demographics, exploring two alternative futures with different levels of greenhouse gas emissions and atmospheric concentrations of CO2. If business-as-usual greenhouse gas emissions continue, it’s likely that all but a few polar bear populations will collapse by 2100. | AFP

The world right now has less than 26,000 polar bears. These include 19 subpopulations spread across Norway to Canada to Siberia. The bears rely on ice to find food, fishing out seals from the holes in the ice. Sometimes this can take hours, or even days.

Also read: Habitat loss in an Australian state may drive koalas to extinction by 2050

Very recently, images of skeletal polar bears that were starving went viral on social media, highlighting the animal’s plight. The sea ice that they depend on is currently melting, which will in turn cause a decline in polar bear populations.

Way more than what was expected

The researchers claim that this drop in the reproduction rates was way over what they that expected. Even though the bears are used to fasting for months, after one point they will be unable to reproduce if they can’t find food for long periods of time.

Also read: Emissions of planet-warming methane have risen by 9% in the last decade

As part of the study, the researchers looked at 13 out of 19 polar bear subpopulations, which account for 80 per cent of the total species population. They did, however exclude bears from the Archipelago ecoregion in the Canadian Arctic, for the geography of the region makes it difficult to offer predictions.

The bears in Hudson Bay and Davis Strait in Canada will most likely fail to reproduce by 2040, if emissions are left unchecked. By 2080, bears in Alaska and Russia will start to perish. Leading up to 2100, the whole global population might collapse and disappear.