A Koala named 'Petra' sitting on a tree trunk in her isolation cage at Sydney's Wildlife World Photograph:( AFP )

The report claims that without urgent government intervention, the territory will lose all its koala population, many of whom were killed in the long-running bushfires that engulfed Australia recently

A new report paints a grim picture of the future of koalas in Australia. In the Australian state of New South Wales, there may be no koalas left by 2050.

The report claims that without urgent government intervention, the territory will lose all its koala population, many of whom were killed in the long-running bushfires that engulfed Australia recently.

Currently, the state has 36,000 koalas. A parliamentary inquiry revealed that these numbers are unreliable, and outdated. As logging and habitat displacement continues, koalas may be wiped from the state, and consequentially the country over the next three decades.

The report was presented on Tuesday, and claimed that the loss of habitat for koalas had been amplified owing to the 2019-2020 bushfires, which rendered 24 per cent of their habitat unliveable. Some habitat regions suffered damage amounting to over 80 per cent loss.

Climate change, complemented by fires and droughts, may drive koalas to extinction. 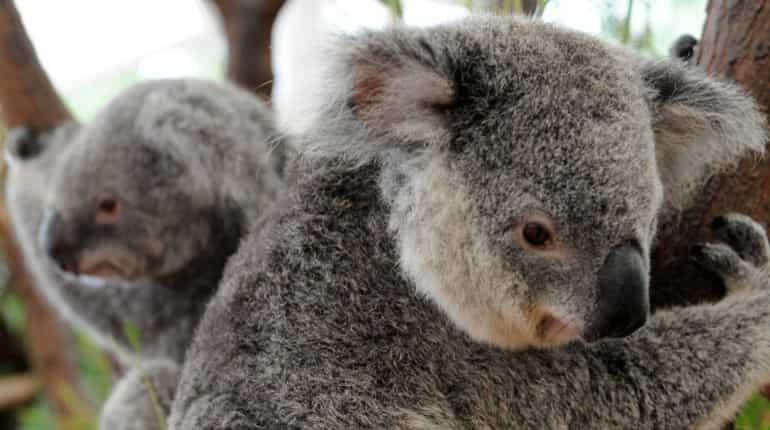 Two of 72 koalas which were displaced from their habitat by the flood waters recover in an emergency shelter at the Lone Pine Koala Sanctuary in Brisbane on January 15, 2011 | AFP

According to the report, intervention is the need of the hour. “Given the scale of loss as a result of the fires to many significant local populations, the committee believes the koala will become extinct in New South Wales well before 2050 and that urgent government intervention is required to protect their habitat and address all other threats to their ongoing survival,” the report said.

The state once had a thriving koala population, and the report found that the local extinction happened before the bushfires hit the country.

The report brings to light the inadequacy of existing laws in dealing with the threat. “The report found that habitat loss and fragmentation was the biggest threat to koalas, yet at every turn we were handed evidence that showed our current laws are inadequate and facilitating the clearing of core koala habitat”.

Based on their findings, the committee made 42 recommendations. They demanded a prioritised action from the government in protecting the koalas, to work on strengthening monitoring methods, and to increase funding for conservation groups that seek to help the koalas.

Additionally, the committee demanded the government to ban opening old forests to logging, and to provide incentives to farmers willing to protect their lands instead of clearing it.

They asked for a “significant increase in koala habitat protected from logging, mining, land clearing and urban development”.

The state’s conservation council reiterated the findings of the committee and called for immediate help. “We are pleased that there is a growing political consensus that koala extinction is a very real possibility if we don’t act urgently to protect koala habitat,” the council’s chief executive, Chris Gambian told the Guardian.

A report on Australia’s environmental laws is due this week, with the threat of loss of habitat looming large on the koala population.