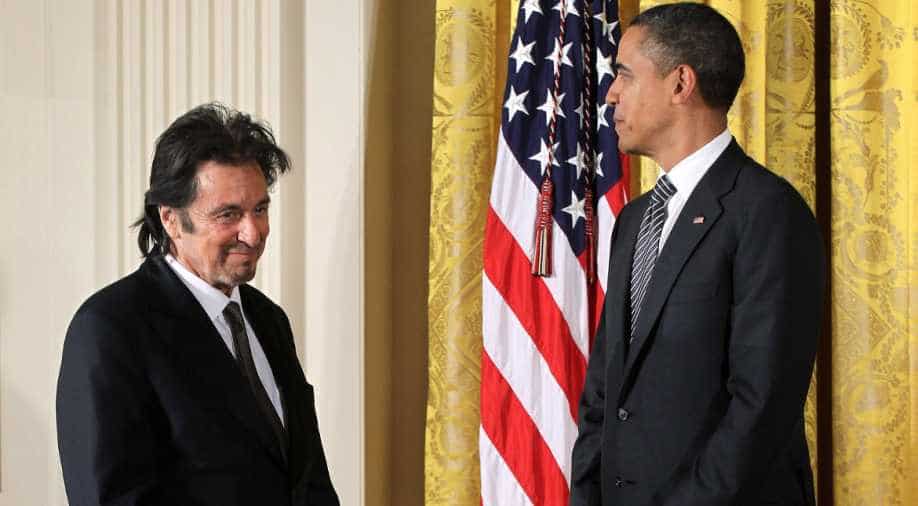 At a White House reception prior to the reception, Obama called the awards "one of the parts of the job that I will miss". Photograph:( Getty )

It was a bittersweet moment, with Obama making one of his final goodbyes to celebrated artists as president.

The first couple received an extended standing ovation as they entered the Opera House of the Kennedy Center, a monument to the late president John F Kennedy.

"This is a joyous day. It's the best Christmas present!" Staples told AFP on the red carpet about receiving a Kennedy Center Honor, considered the nation's highest recognition for performing artists, just before Obama leaves offices.

At 77, Staples lives up to the maxim that age is only a number. "People ask me, 'Mavis, when are you going to retire?' Retire for what? I love what I'm doing and I intend to sing until I can't sing no more, forever," she said.

Sean Penn, Garth Brooks, Aretha Franklin, Kevin Spacey and Ringo Starr were some of the A-listers who serenaded and hailed the legacy of the award recipients during the star-studded performance hosted for the third consecutive year by late night talk show host Stephen Colbert.

As he kicked off the evening, Colbert said America was lucky to have a "passionate, intelligent and dignified" president. That brought loud cheers and applause from the crowd. Colbert then joked: "Sir, I don't know why you stood up, I was talking about Michelle."

At a White House reception prior to the reception, Obama called the awards "one of the parts of the job that I will miss".

Obama jokingly asked Eagles guitarist Joe Walsh, a notorious troublemaker, not to trash the White House because he is leaving soon and wants his "security deposit" back.

The Eagles were set to be honoured last year but postponed due to the illness of founding member Glenn Frey, who died in January. He received his award posthumously.

Grammy Award-winner Juanes performed "Hotel California" with guitarist Steve Vai, who said before the event that playing the piece's famed guitar riff in front of the musicians was "surreal."

Taylor, 68, performed "America the Beautiful" at Obama's second inauguration in January 2013, while Staples, who like none other provided the music of the civil rights movement, sang at Kennedy's inauguration.

"In 1968, when James Taylor signed with Apple Records, I was in Vietnam and America was at war abroad and in turmoil here at home. We were fighting and marching to the music of (Jimi) Hendrix, the drumming of Ringo (Starr), the Doors, the (Rolling) Stones, and the (Grateful) Dead," Secretary of State John Kerry said Saturday during a reception at which the artists received the awards.

"And amid the darkness of that era, James Taylor returned sunlight to our minds, conjuring up the warm images of snow on the turnpike from Stockbridge to Boston, deep greens and blues as the colours of choosing, and moonlight ladies singing rockabye to 'Sweet Baby James.'"

Argerich, 75, is widely considered one of the world's best, if reclusive, pianists. For nearly two decades, she largely shunned solo performances, playing almost exclusively with orchestras and chamber ensembles, until a sold-out recital at Carnegie Hall in New York in 2000.

"I was surprised. I didn't think I was entitled," Argerich said of learning she had won the award.

Academy Award nominee Don Cheadle hailed Pacino as being humble about his long and storied career that has seen him perform in some 100 films and plays, including "The Godfather," "Scarface, "Sea of Love," "Heat" and "Scent of a Woman".

"His gift, for all the inspiration and intensity that he brings to his roles, is that he lets us into what his characters are feeling," Obama said.