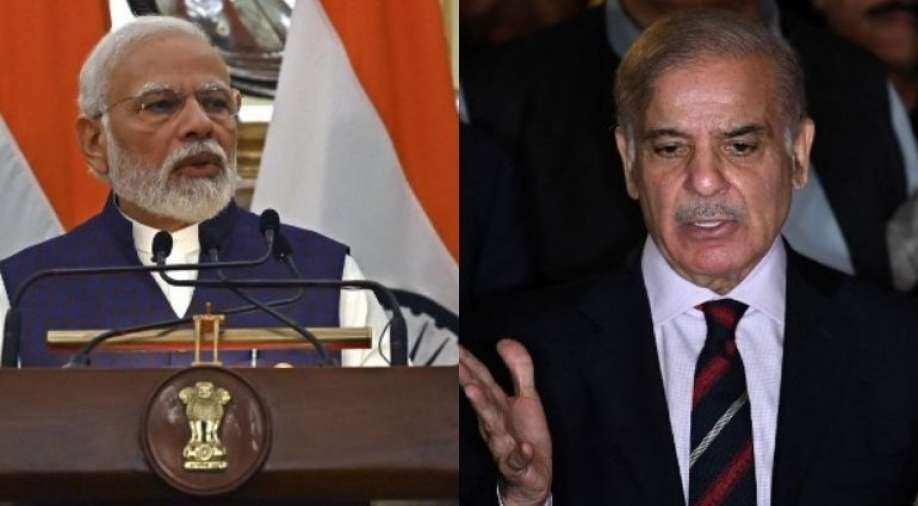 In this combination of images, India's Prime Minister Narendra Modi (left) can be seen along with Pakistan PM Shehbaz Sharif (right) Photograph:( AFP )

Highly placed sources say if the meeting between two leaders transpires, then PM Modi may visit the Katas Raj Temple in Pakistan.

According to sources, back channels discussions are underway between Indian and Pakistani officials to formalise a meeting between Indian PM Narendra Modi and Pakistan's newly-appointed Prime Minister Shehbaz Sharif during the SCO summit in Tashkent in July.

PM Modi and Pakistan PM Shehbaz Sharif are expected to attend the SCO summit on July 17 in Tashkent, Uzbekistan. Highly placed sources say if the meeting between two leaders transpires, then PM Modi may visit the Katas Raj Temple in Pakistan.

Sources say the Pakistan PM Shehbaz Sharif may then host the Indian prime minister in Islamabad.

Watch: 'All outstanding issues must be solved via dialogue,' Sharif writes to Indian PM Modi

The meeting between Sharif and PM Modi however may be subject to stability within the military ranks, sources claim with Pakistan's Army chief General Qamar Javed Bajwa's term due to expire in November.

In 2015, PM Modi had visited Pakistan to meet ex-PM Nawaz Sharif during a surprise stopover in Lahore. However, relations between the two sides nosedived after the 2016 Pathankot terrorist attack and the 2019 Pulwama terror attack.

Both countries had earlier pulled out their high commissioners from each other's countries. India has been operating its mission with a curtailed staff. The possible meeting between PM Modi and Pakistan PM Sharif could be the first step towards the restoration of ties between the two countries, sources say.