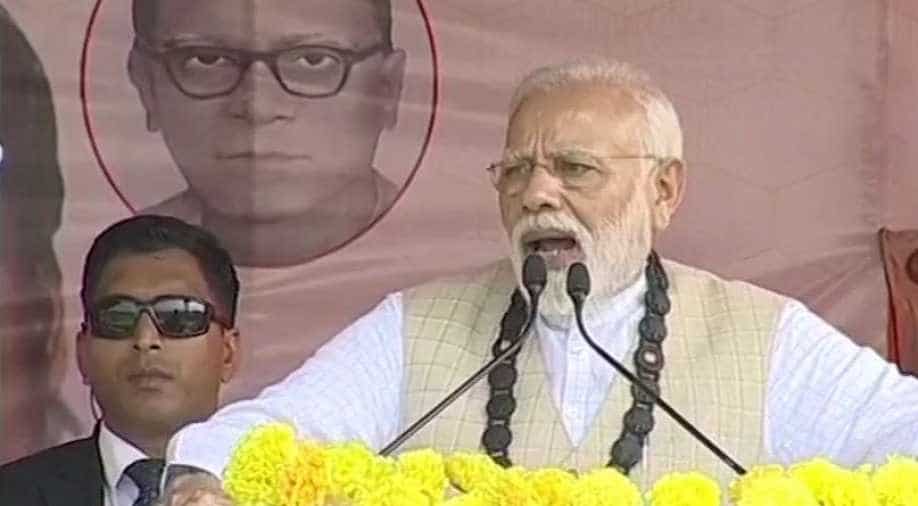 Modi was addressing a public rally in Thakurnagar, West Bengal

Claiming she had become jittery due to people's love for BJP, Modi accused his political rivals of misleading the distressed farming community through farm loan waivers.

Modi was addressing a public rally in Thakurnagar, West Bengal.

Prime minister also made a strong pitch for the passage of the Citizenship (Amendment) Bill that seeks to accord Indian citizenship to non-Muslim minorities from Pakistan, Afghanistan and Bangladesh who fled their countries due to religious persecution, according to news agency PTI.

Addressing a well-attended event of the Scheduled Caste Matua community, where his speech was welcomed with loud cheers, Modi said, "Now I can understand why Didi (Banerjee) and her party are indulging in violence...Killing innocent people. She has become jittery because of your love for us."

Calling yesterday's Budget a "historic step" for the welfare of farmers, the working and middle class, he said these sections were neglected for years after Independence.

Modi said that his government took honest steps to improve the condition of farmers and the working class.

"We have announced measures in our budget that will benefit 12 crore, small farmers, 30-40 crore workmen, and three crore middle-class people," he said.

He also said villages were neglected for many, many years after Independence.

There was commotion at the rally ground which prompted him to cut short his speech barely after 14 minutes, according to PTI.

Before the rally, the prime minister visited the Matua Thakurbari and sought the blessings of Baro Ma, the current leader of the community and widow of the founder of Matua Mahasangh Harishchandra Thakur.