Gains of past two decades need to be preserved: PM Modi on Afghan peace process 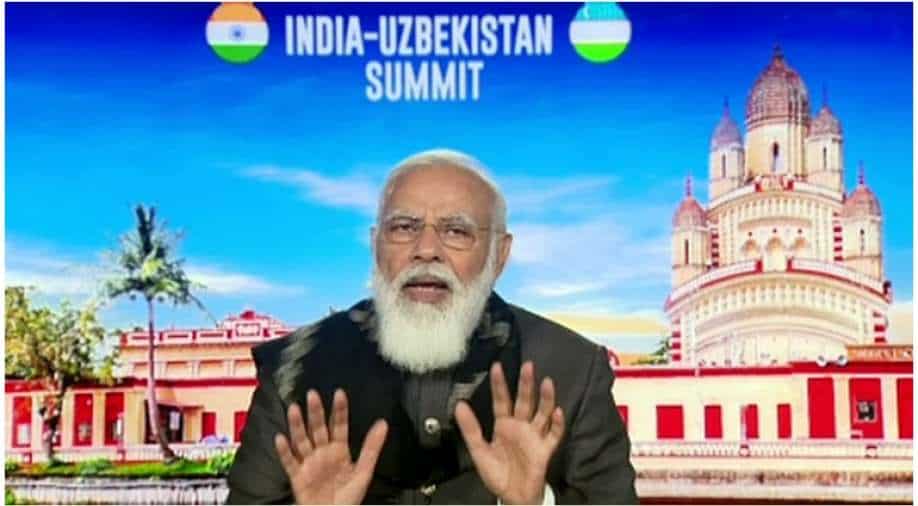 In his opening remarks at a virtual summit with Uzbek President Shavkat Mirziyoyev, Modi also said India and Uzbekistan are standing together firmly against terrorism and have similar concerns over extremism, fundamentalism and separatism

The Afghan peace process must be "led, owned and controlled" by Afghanistan and it is necessary to preserve the achievements of the past two decades, Prime Minister Narendra Modi said on Friday.

In his opening remarks at a virtual summit with Uzbek President Shavkat Mirziyoyev, Modi also said India and Uzbekistan are standing together firmly against terrorism and have similar concerns over extremism, fundamentalism and separatism.

"We have similar concerns about extremism, fundamentalism and separatism. We both stand firmly together against terrorism. We also have a similar approach on regional security issues," the prime minister said.

"We agree that the restoration of peace in Afghanistan requires a process that itself is led, owned and controlled by Afghanistan. It is also necessary to preserve the achievements of the last two decades," he said.

The prime minister's comments on Afghanistan come in the midst of renewed momentum in the Afghan peace process.
Top Afghan peace negotiator Abdullah Abdullah and several other senior leaders from the country visited India in the last few months to apprise about the peace process.

In his remarks, Modi also said that India wants to further intensify its development partnership with Uzbekistan and expressed happiness that many projects are being considered in that country under the Indian Line of Credit.

Uzbekistan is a key country in Central Asia which India considers as its 'extended neighbourhood'. The bilateral ties now encompass a wider canvas of cooperation including in areas of defence and security, trade and investment, energy, agriculture, education and science and technology.

Both countries are currently negotiating a bilateral investment treaty (BIT) and a preferential trade agreement. Last year, a pact was sealed providing for long-term purchase of uranium by India from Uzbekistan.

In his remarks, the prime minister also referred to cooperation between the two countries in key areas of defence, space and atomic energy sectors.

"Our security partnership is becoming a strong pillar of bilateral relations. Last year, the first joint military exercise between our armed forces took place. Our joint efforts are also increasing in the areas of space and atomic energy," he said.

Modi also said India was ready to share its expertise and experience with Uzbekistan as per its development priorities.

"India has great potential in areas such as infrastructure, IT, education, health, training and capacity building, which can be useful for Uzbekistan. The establishment of a joint working group on agriculture among us is an important and positive step," he said.

"With this we can find opportunities to increase our agricultural trade which will help the farmers of both countries," he added.

Modi also talked about cooperation between the two countries during the coronavirus pandemic.

"It is also a matter of satisfaction that during this difficult time of the COVID-19 epidemic, both countries have fully supported each other, whether to supply medicines or to ensure return of each other's citizens to home," he said.