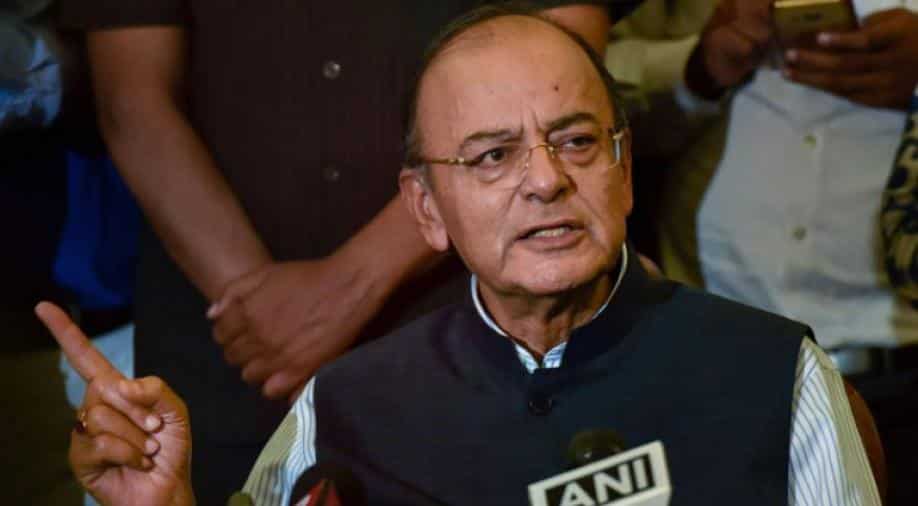 Arun Jaitley said, 'Narendra Modi government had efficiently maintained the fiscal discipline as the fiscal deficit and Current Account Deficit (CAD) have been contained and inflation has been reduced drastically while GDP kept growing'.

Rejecting claims about high unemployment in India as “disinformation”, Union Minister Arun Jaitley on Friday said it would be “economic absurdity” to believe that jobs are not being created at a time when the country is witnessing high economic growth.

Jaitley, who could not present the interim Budget because of his indisposition, also defended the budgetary provision of Rs 6000 for each marginal farmer which has been mocked by the Opposition as a meagre amount, saying it is meant to be an “additional support” to the agriculturists.

In an interview to ANI here, he underlined that the Narendra Modi government had efficiently maintained the fiscal discipline as the fiscal deficit and Current Account Deficit (CAD) have been contained and inflation has been reduced drastically while GDP kept growing.

He was asked about the ‘leaked report’ of the National Sample Survey Office (NSSO) which said there was unprecedented unemployment in the country, “I don’t think it is a report. It is a draft which has not been approved,” he replied.

Jaitley, the Finance Minister since 2014 whose charge has been temporarily given to Piyush Goyal, said it would be “economic absurdity to say that there are no jobs” when the country is witnessing high economic growth rate.“I completely refute (claims about joblessness),” he said.

While terming the contention as “disinformation”.He said if there was such acute joblessness as projected, there would have been agitation, which is not the case.

Talking about the budgetary provision of Rs 6000 each for marginal farmers, Jaitley said it is an additional support to the agriculturists.

Reacting to the Opposition mocking the amount as being meagre, he said they should stop shedding “crocodile tears for the farmers”.

Noting that the provision will involve annual outlay of Rs 75,000 crore, the senior minister said this allocation is for the first year which can increase in the future.

Jaitley emphasised that loan waivers are not a solution to the farmers’ woes but acknowledged that India’s farm sector still needs support.

Attacking the Congress, Jaitley questioned what the UPA government had done during its 10-year rule."What did the UPA do in 10 years of power- a onetime loan waiver of 70,000 crores. Only 52,ooo crores were waived.

And the CAG report was that, out of the 52,ooo crores a significant part went to the traders and businessmen and not to the farmers.  So a political group or a party which came out with a national hoax of this kind has the audacity to say that a scheme like this at a pan-India level is too little, " he said."Please don’t shed crocodile tears today for the farmers.

The opposition also has several governments, let them announce similar schemes, I am sure the other governments within their fiscal space will also consider this and therefore you can top it off. And it is not like this is the sole prerogative or the responsibility of the Centre, we are in a cooperative federalism both Centre and state must cooperate.

This is a huge amount we are doing and we are now as against a onetime loan waiver of 52,000 cr which was partly eaten by traders and businessmen. This is 75,000 cr in the first year itself, I am sure it will expand in future years," he added.

Asked to comment on criticism that the interim Budget presented on Friday was aimed at wooing the voters in the upcoming Lok Sabha elections, Jaitley said, “Budgets are a part of Parliamentary democracy, so are the elections.”Citing the previous examples of populist budgets, he said in 2009 and 2014 the then Finance Ministers of UPA governments Pranab Mukherjee and P. Chidambaram had announced stimulus packages.

"In the 2009 interim budget, Mr. Paranab Mukherjee, not even in the interim budget, but while replying to it announced a stimulus package, where he reduced the excise duty to 2 per cent across the board, well the same argument was applicable then? In 2014 Mr. Chidambaram on a number of products including engineering products and automobiles gave a duty rebate, the same argument can be taken now?" he asked.

He also refuted allegations of any agrarian crisis in the nation and said, " I guess by saying crisis, we are overstating it. the Indian farmer is really the producer of our food, his productivity levels have immensely improved and therefore in the last few decades we have seen shortages becoming into surpluses.

Four years ago pulses were in shortage, he is now producing in surpluses. Now he gets hit because he is producing more and the cost goes down and therefore world over, even the US is subsidizing its farmers, the EU is subsidizing there farmers ."

"Everywhere you maintain a balance between food prices and subsidizing the framers so that the farmer gets the incentive for producing something.

I think our farm sector still needs support and I am quite sure if the Centre and the states come together, with these kinds of programs, rather than mere myopic slogans, which really will not give long term sustenance to the farmers,  it can certainly achieve a lot more," he added.

He saw no wrong if the middle class, which is a big chunk in India, gets some help through a budgetary exercise."The kind of fiscal space that we have created enables us to help the middle class and mind you India`s middle class is being very vastly strengthened.

And if the UPA inflicted a 10% inflation on them, which we brought down, obviously the taxpayer also, his real value of money has declined and therefore exempting the smaller taxpayer and mind you his ability to spend more  means a boost to the economy.

What given by a way of direct tax benefit also comes back by a way of indirect taxes  because the purchasing power of the India`s middle class has improved," he added.  (ANI)