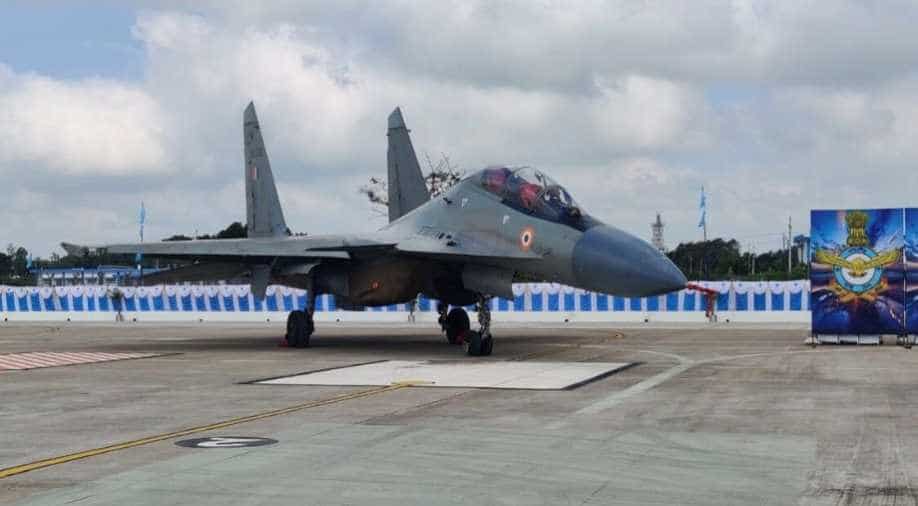 The ceremony was conducted in the presence of Chief of Defence Staff Gen. Bipin Rawat and Air Force Chief RKS Bhaduria and several other senior officials from the Defence establishment.

The Sukhoi aircraft are termed as air-superiority fighters and are equipped to carry the BrahMos supersonic cruise missile that has been jointly developed by India and Russia. The squadron is expected to play a crucial in guarding the all-important Indian Ocean Region (IOR) and the southern peninsula.

The Sukhoi aircraft that has been inducted into the resurrected '222 Tiger Sharks' squadron which was accorded a ceremonial water cannon salute as it rolled down the tarmac.

The ceremony was conducted in the presence of Chief of Defence Staff Gen. Bipin Rawat and Air Force Chief RKS Bhaduria and several other senior officials from the Defence establishment.

In pics | Eye on China: How IAF's Sukhoi fighters with BrahMos cruise missiles can shift balance in Indian Ocean Region

Speaking at the event, Chief of Defence Staff General Bipin Rawat said that the resurrection of the Tiger Sharks squadron highlights the integration and jointness that are to be the future of the Indian Armed Forces.

"Being equipped with the BrahMos this aircraft will become a game-changer for our armed forces and extensively enhances the security of our maritime domain. The squadron can perform tasks in support of land forces, in protecting vulnerable areas and any other assigned task besides operating in close conjunction with our Navy and Army. Happy targeting in the years ahead and I'm confident that you will earn laurels", General Rawat elaborated.

Lauding the joint efforts of various defence manufacturers and partners Air Chief Marshal RKS Bhadurai said, "after the surface-to-surface BrahMos, we discussed an air-launched version, but it was challenging and thought of as impossible, as a missile of the size and weight 2.5 tons had not been integrated into an Air Force platform. But our dedicated teams of BAPL, DRDO and HAL have made it possible indigenously."

Urging the new squadron to serve the nation he said that the long wait in resurrecting the Tiger Sharks was worth it as they have the latest aircraft and latest weapon. He stated that the squadron has to operationalize fast and take up all roles expected - air defence of the southern peninsula and critical national assets in this area of responsibility, besides the maritime role support for Navy and offensive or defensive role for the southern peninsula.

"True to your name you must be lethal at first bite. Bite every time and every mission you get airborne and ensure you are lethal", he added.

Sharing his perspective with WION, on the Thanjavur base and the technical challenges that India overcame to integrate the Brahmos and Sukhoi, Dr A. Sivathanu Pillai, Founder and CEO of BrahMos Aerospace said, "The BrahMos missile has two capabilities - air to ship, air to land. When the need arises to use it against ships, the peninsula will be the main region and when it comes to hitting ground targets, it can be the border areas and land-based adversaries. The squadron in Thanjavur is a part of the strategy to spread the delivery platform and weapons in different places"

"As it is, the Sukhoi is not meant for carrying BrahMos, as its total weapons load has to be around 5.5tons, of which the Brahmos alone is 2.5 tons. We made several modifications including stiffening of the structure to ensure that the missile can be carried in the underbelly of the aircraft, as opposed to the wings, for smaller missiles and bombs", Dr Pillai added.

WION spoke to Retd. Air Marshal Padamjit Singh Ahluwalia to understand the important role that the "Tiger Sharks" are meant to play.

He said, "The Su-30 MKI, has a range of 3000kms when augmented with mid-air-refuelling. A 3000km arc would mean that we can cover right up to Madagascar and perform Intelligence, Surveillance and Reconnaissance (IRS) roles. Our Sukhois are equipped with good radars and avionics that can detect targets on land and sea. Using the BrahMos it can engage aircraft carriers and other warships with its standoff range of 290kms. With its onboard Electronic Countermeasures(ECM) and self protections devices, the Sukhois at Thanjavur add immense combat potential to the Indian Forces and definitely gives us the edge in Indian Ocean Region".