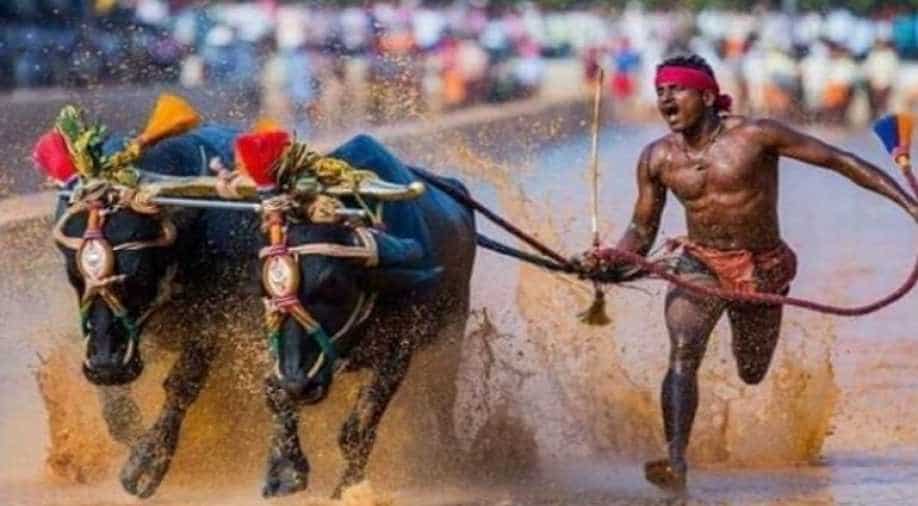 Srinivasa Gowda at a buffalo race called Kambala in a paddy field on in Kadri. Photograph:( Twitter )

"People are comparing me to Usain Bolt. He is a world champion. I am only running in a slushy paddy field", said the humble champion.

Twenty-year-old Srinivasa Gowda from Karnataka, India might just have created history. On February 1, Gowda from Mudbidri ran 142.5 metres in a mere 12.62 seconds while participating in the traditional buffalo race called Kambala.

This means that Gowda covered 100 metres in an incredible 9.55 seconds. The race is held in slushy paddy fields every year where participants run with a pair of buffalo.

Today Gowda is being hailed as the Usain Bolt of India.

"People are comparing me to Usain Bolt. He is a world champion. I am only running in a slushy paddy field", said the humble champion.

But Gowda's Kambala exploits have not gone unnoticed, not the least bit. Business honcho Anand Mahindra took to twitter calling for Gowda to be trained to become a 100m sprinter.

Just one look at his physique & you know this man is capable of extraordinary athletic feats. Now either @KirenRijiju provides him training as a 100m sprinter or we get Kambala to become an Olympic event. Either way, we want a gold medal for Srinivasa! 😊 https://t.co/H3SBiOVSKr

India will rise and shine the Indic way!
100 meters in just 9.55 sec is an amazing feat. Proper training to Srinivas Gowda will definitely help him to make name for the country. My best wishes.@KirenRijiju @CTRavi_BJP https://t.co/ImgR3W1v4W pic.twitter.com/2zaUTBpLYo

Congress Leader Shashi Tharoor also took to twitter and urged the Athletics Association of India to transform Gowda into and Olympic champion.

Faster Than Usain Bolt? Karnataka Man Running With Buffaloes Covers 100 Metres in Just 9.55 Seconds. I urge the Athletics Association of India to take this man under their wing & make an Olympic champion of him. Wonder how many hidden talents we have! https://t.co/G7jPE2zIng

Kiren Rijiju, Union Minister Of State for Youth Affairs and Sports was quick to react and said that the Sports Authority of India has already reached out to Gowda and that his train tickets have been booked for SAI centre.

Yes @PMuralidharRao ji. Officials from SAI have contacted him. His rail ticket is done and he will reach SAI centre on monday. I will ensure top national coaches to conduct his trials properly. We are team @narendramodi ji and will do everything to identity sporting talents! https://t.co/RF7KMfIHAD

I'll call Karnataka's Srinivasa Gowda for trials by top SAI Coaches. There's lack of knowledge in masses about the standards of Olympics especially in athletics where ultimate human strength & endurance are surpassed. I'll ensure that no talents in India is left out untested. https://t.co/ohCLQ1YNK0

Srinivasa Gowda has sure been propelled to overnight stardom by his incredible performance in the sport. Multiple such instances had stirred excitement among sports fans in India in the past too.

One Rameshwar Gurjar of Madhya Pradesh had enjoyed fame with a video emerged of him running 100 metres in a mere 11 seconds, that too barefoot. He too was hailed as Usain Bolt of India. However, unfortunately, Gurjas was not able to repeat the performance at SAI and the fame soon fizzled out.

So, will Gowda be able to repeat his performance without his buffalos on the national stage? We sure hope so!