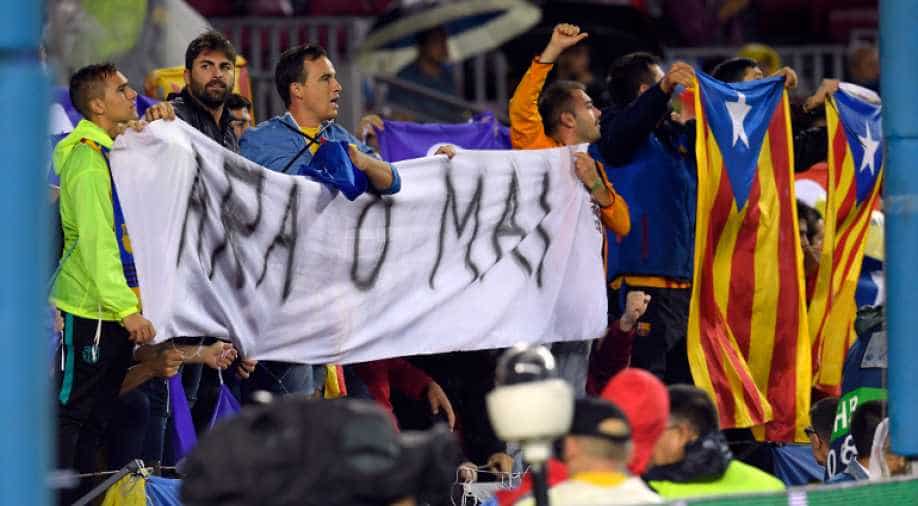 The club has backed Catalonia's right to self-determination in a referendum, but has never supported either side of the independence debate. Photograph:( AFP )

Barcelona president Josep Maria Bartomeu faces the club's members at an annual general meeting on Saturday fighting an increasingly difficult battle to balance the conflicting interests of fans in favour of Catalan independence and millions of supporters in the rest of Spain and around the world.

A powerful symbol of Catalonia, Barca have been caught in the political crossfire since an independence referendum for the wealthy northeastern region of Spain, deemed illegal by the central government in Madrid, was marred by violent clashes as police forced their way into polling stations to seize ballot boxes on October 1.

That Sunday afternoon, in conjunction with Barca's star-studded squad and after La Liga refused to postpone a match against Las Palmas at the club's iconic Camp Nou stadium, Bartomeu's board took the divisive decision to play behind closed doors as a protest.

Two board members subsequently resigned over the decision to go ahead with the game.

"Our position is very clear, we want dialogue," Bartomeu reiterated after Wednesday's Champions League win over Olympiakos as a standoff between the Catalan and Spanish governments continues.

The club has backed Catalonia's right to self-determination in a referendum, but has never supported either side of the independence debate.

However, that didn't go far enough for many just a day after two civil society leaders of the pro-independence campaign were jailed on charges of sedition.

The Catalan National Assembly (ANC) and Omnium Cultural groups led by Jordi Sanchez and Jordi Cuixart were invited to the directors' box at the Camp Nou in midweek, but both refused the invitation.

"We believe that the message of FC Barcelona doesn't represent the feeling of the majority of the fanbase," the ANC said in a statement.

Both groups had produced a banner calling for Sanchez and Cuixart's freedom that Barca prevented from entering the stadium for fear of reprisals from UEFA, who sanction any displays of a political nature and have previously fined the club for the flying of pro-separatist flags.

Yet, with a 150,000 strong membership and 103 million Facebook followers, there are plenty Barca fans who would like the club to concentrate on points, not politics.

"The club should always be an example of respect to a plurality of opinion among its members, who it is owned by, leaving politics to one side," various Barca supporters' clubs in the northern Spanish region of Leon said in a joint statement on Wednesday.

"For some, he goes too far, for others not enough. No matter what he does, he never pleases anyone."

Bartomeu, therefore, faces a membership on Saturday, 92 percent of whom are resident in Catalonia, faced with an impossible mission.

However, the 54-year-old, a softly spoken businessman is a serial survivor of several club crises.

He assumed the role of president after Sandro Rossell resigned over the murky transfer that brought Neymar to Barcelona in 2013 and when pressured into calling early elections, rode the euphoria of winning a treble to secure a fresh mandate in 2015.

Neymar's departure to Paris Saint-Germain in August provoked a vote of no confidence from disgruntled members which also failed to garner sufficient support to succeed.

The Brazilian has so far not been missed as Barca lead La Liga and their Champions League group with a stunning record of 10 wins and one draw from their opening 11 games in all competitions.

And one of the primary orders of business on Saturday will be to pass a budget for the new season backed by a record revenue of 897 million euros ($1.06 billion).

Finances may ultimately be the tipping point for how Barca position themselves.

La Liga president Javier Tebas admitted this week the league's booming TV rights contracts would lose at least 20 percent of their value should Barca be cut adrift in an independent state.

And the financial repercussions for Barca would be even more severe.

"They wouldn't be able to have world-leading figures," Jose Maria Gay de Liebana, professor of economics at Barcelona University, told AFP of a squad currently boasting the likes of five-time World Player of the Year Lionel Messi.

"They would become a medium-sized club."