Style trumps fashion at Prada, Pilotto goes to the beach at Milan shows 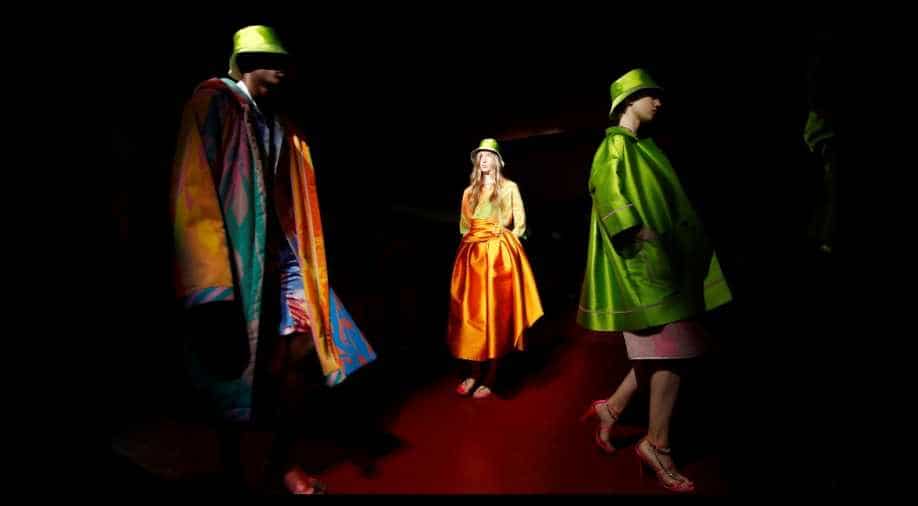 Dresses came in towel-like materials and skirts were reminiscent of sarongs, accessorised with summer hats.

Prada chose personal style over fashion while Peter Pilotto merged the beach with the ballroom at their catwalk shows on Wednesday, kicking off the first day of Milan Fashion Week.

Miuccia Prada, considered an industry trailblazer, presented a spring line she said was about "the power of women over clothing" dressing models in breezy dresses and sharp suits.

There were briefs nods to the 1920s with layered dresses and suits in dark colours or geometric patterns recalled the 1970s.

Dresses were overall light, colourful ribbed knits came as halterneck tops and pencil skirts. Black coats with white buttons were almost teacher-like. Leather skirts were tied at the waist and dabs of brocade popped up on suits.

"I tried to work so the person is more important than the clothes and the fashion," Prada told reporters.

"It was more about personal style than fashion."

Trousers were wide-legged, worn with jackets with white buttons.

UK-based Peter Pilotto added "a dose of solar optimism" to the catwalk with a vibrant and colourful collection that merged beach and ballroom inspirations.

As well as unveiling their latest womenswear, designer duo Peter Pilotto and Christopher De Vos showcased some new creations for men in the line that included plenty of floral patterns and bright hues - orange, lime, turquoise and pink.

Dresses came in towel-like materials and skirts were reminiscent of sarongs, accessorised with summer hats.

Shirts were large and loose and there were also engineered cropped knit tops and dresses, ribbed skirts, crochet-like cardigans and spacious jackets.

The ballroom theme came in the shape of voluminous skirts synched at the waist, corseted tops and silk gowns worn with sparkling jewellery and stiletto heels.

Male models wore silky suits, floral printed shirts and cropped trousers, accessorised with hats and sandals. One model looked like he was heading straight for the sea wearing a colourful bathrobe-like design over shorts and an open shirt.

"For us, it was not really about launching menswear yet because we are not yet, but it was more about seeing how to change the female silhouette," Pilotto told reporters backstage.

"As male designers, we feel that more than ever it's important to connect even deeper to the garments so we wanted to be able to try them on ourselves and understand how they feel."

The designers said they wanted to create an abstract floral painting feel. The mixed designs were also inspired by couples borrowing each other's clothes.

"We want to explore that idea further, it's a kind of a gender-neutral range, which depending on how it's worn can be either very masculine or very feminine and we feel that's a very modern way forward," Pilotto said.

The brand, which launched in 2007, has dressed numerous celebrities and was the bridal choice for Britain's Princess Eugenie when got married at Windsor Castle last year.

A peacock motif decorated many of the designs, which came in pink, purple, brown, yellow and orange. Evening dresses in mainly blue and black were long and shimmering.

Milan Fashion Week is the third leg in the month-long Spring/Summer 2020 catwalk run which began in New York and also includes London and Paris.