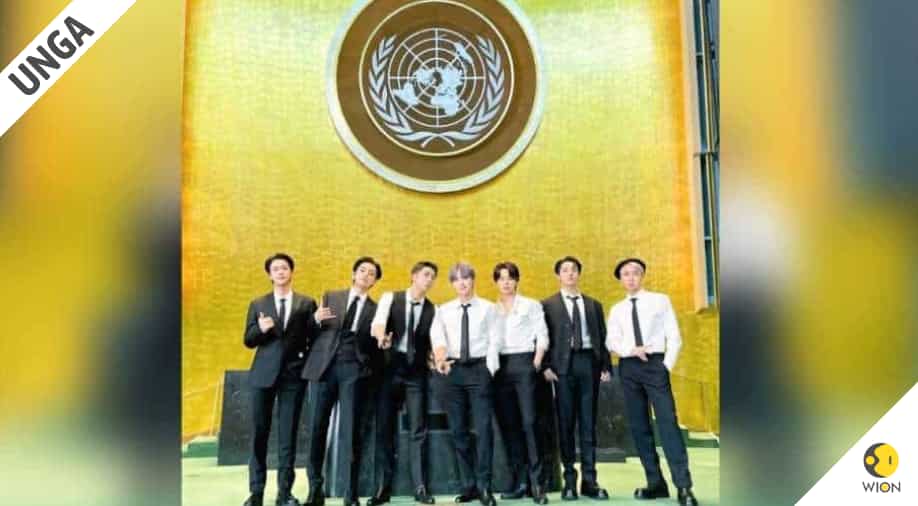 It was a big night for K-pop as global sensation BTS took to the world stage at the United Nations General Assembly. The band addressed the world leaders at UNGA and also performed their song 'Permission to Dance'.

Soon after the news came out of BTS making it to UNGA that usually always has policymakers engaging in politics and world affairs, netizens thronged the United Nations’ official YouTube channel and posted their signature purple heart emoji along with crying emoji and thumbs up emoji, to name a few. More than 980,000 viewers were tuned in there, and tens of thousands of others viewed on other YouTube channels and platforms.

In total, there were more than one million viewers watching BTS at the UNGA, a first.

In their speech, the seven BTS members -- Jin, Suga, J-Hope, RM, Jimin, V and Jungkook -- spoke about their experiences as part of the younger generation, and how their views about their future paths were being shaped by the pandemic.

Their younger fans in their teens and in their 20s have spent nearly two years in the pandemic learning new things online, connecting with each other on a deeper level, and studying up on issues such as climate change and how they can make a difference, the band members said. BTS addresses UNGA; key highlights of their speech

“I’ve heard that people in their teens and 20s today are being referred to as covid’s lost generation,” RM said. “I think it’s a stretch to say they’re lost, just because the path they tread can’t be seen by grown-up eyes.”

They then spoke in support of the COVID-19 vaccines. “Yes, all seven of us, of course we’ve received vaccinations. The vaccine was a sort of ticket to meeting our fans waiting for us and to being able to stand here before you today,” J-Hope said.

After their speech, BTS showed a video performance of their summer hit song, ‘Permission to Dance.’ The video showed the members singing and dancing throughout the General Assembly Hall and on the UN headquarter premises in New York.

The band members said they hoped the song would inspire positivity and welcomeness.

This is not the first UN visit by BTS.

This was, however, their first appearance in their new formal diplomatic role as “special presidential envoy for future generations and culture,” a designation given by South Korean President Moon Jae-in ahead of their trip to accompany him to the 76th session of UN General Assembly in New York.

Also Read: BTS: Jungkook's fan gifts him a piece of land in Scotland for his birthday