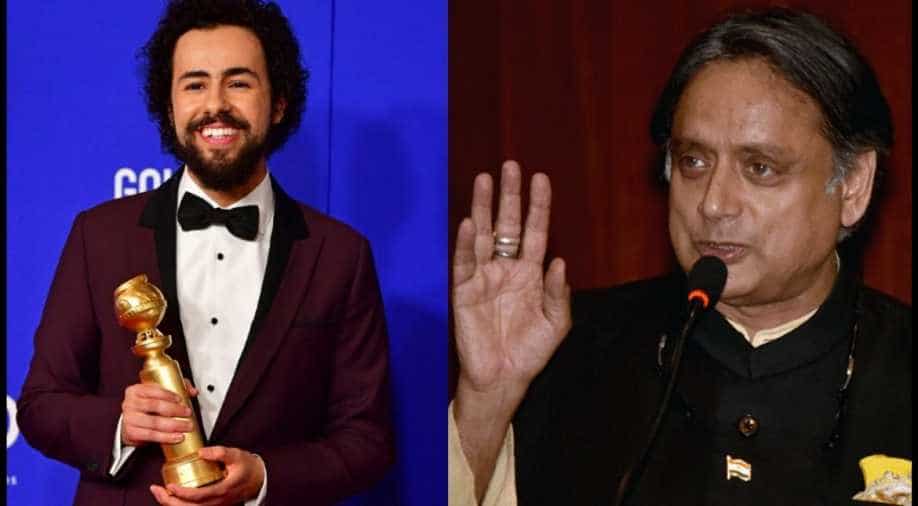 Users tagged Shashi Tharoor in Ramy Youssef’s acceptance speech video, saying that he won’t be happy that the actor used this phrase at the Golden Globes event.

The 77th Golden Globes was a starry affair on January 6, 2020 (Indian time) as celebs from around the world got together to celebrate last year’s films and TV shows that entertained the audience and made moolah at the box office. Among the list of winners were some surprise wins, some that we anticipated while some that made history including Awkwafina’s win that established her as the first Asian to win best actress comedy or musical for her role in 'The Farewell' and ‘Parasite’, a South Korean drama that won best foreign film Golden Globe and is also tipped to win big at the Academy Awards 2020. Check out the complete list of winners here.

While these stole the show, another thing that stood out was the Golden Globe winner Ramy Youssef’s acceptance speech that included the phrase “Allahu Akbar”. As he received his Golden Globe for best actor in a comedy series for his role in ‘Ramy’, he said, “I would like to thank my God. Allahu Akbar. Thank you, God.”

“Look, I know you guys haven’t seen my show. We made a very specific show about an Arab Muslim family living in New Jersey, and this means a lot to be recognized on this level,” he continued. Also see: Priyanka Chopra and Nick Jonas turn heads on the red carpet

Ramy was handed over the award by Jennifer Aniston and Reese Witherspoon. Watch red carpet looks from the Golden Globes 2020.

I want to be friends with @ramy

Ramy dropping an Allahu Akbar at the #GoldenGlobes pic.twitter.com/z3TM9YELw7

As soon as Ramy said the phrase on the globally-watched platform, Twitter went into frenzy with fans crushing over the actor for proudly flaunting his Egyptian identity while some users from India tagged Indian politician Shashi Tharoor calling for a reaction from him. “Allahu Akbar” is a widely used phrase by the Muslims all around the world as it means ‘Allah is great’ and they use it every time before starting something, to seek blessings from God. The phrase, however, has been politicised around the world and is seen as a war cry and is often associated with radical Islam. Read about politics taking center stage at the 77th Golden Globes.

Meanwhile, Shashi Tharoor was brought into the conversation as he recently in December had taken to Twitter over the ongoing anti-Citizenship Amendment Act protests in India sharing a video featuring some Indian muslims chanting “La Ilaha illallah” as part of their fight against Hindutva extremism. He had then said that the fight against Hindutva extremism should give no comfort to Islamic extremism either. He had added that the people who are raising their voice over CAA and NRC are fighting to defend an inclusive India. He was then too bashed for not being sensitised towards the demands of the Indian muslims, against whom the Bill (now Act) is discriminatory.

Our fight against Hindutva extremism should give no comfort to Islamist extremism either. We who’re raising our voice in the #CAA_NRCProtests are fighting to defend an #InclusiveIndia. We will not allow pluralism&diversity to be supplanted by any kind of religious fundamentalism. https://t.co/C9GVtB9gIa

Users thus tagged Shashi Tharoor in Ramy Youssef’s acceptance speech video, saying that he won’t be happy that the actor used this phrase at the Golden Globes event.

CC: @ShashiTharoor
Watch this video before you go to sleep. Good Night! https://t.co/CRkBoVIkAR

In another note, the 77th Golden Globes had lesser number of wins for content from Netflix and other OTT platforms while it backed more international studios’ work. ‘1917’ and ‘Once Upon a Time in Hollywood’ won big awards last night while Netflix’s ‘Irishman’ was the biggest loser with no award in its kitty.