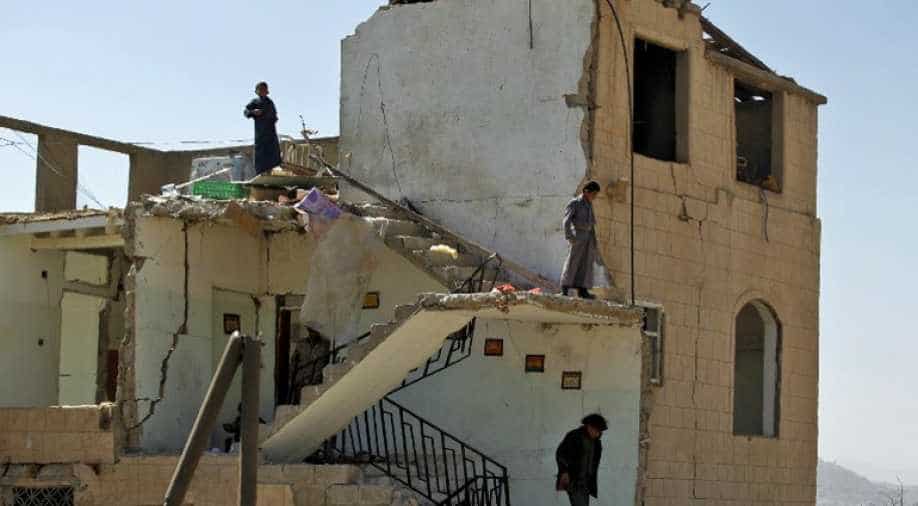 Boys wander amidst the rubble of a house destroyed by Saudi-led coalition air strikes on the outskirts of Yemen capital Sanaa on November 14. Photograph:( AFP )

A 48-hour ceasefire announced by a Saudi-led coalition fighting Iran-backed rebels in Yemen began on Saturday, after the beleaguered government finally agreed to a US peace push.

The government, which has deep reservations about a UN peace blueprint it believes undermines its authority, had previously rejected a ceasefire plan announced by US Secretary of State John Kerry after talks with the rebels in Oman earlier this week.

But it has come under huge pressure to back down in the face of an international outcry over the mounting civilian death toll from 20 months of conflict.

"There are international pressures to observe a ceasefire and to resume (peace) negotiations," a source close to the presidency told AFP, requesting anonymity.

The announcement of the ceasefire came not from the government but from the coalition which intervened to prop it up in March last year. "It has been decided to begin a 48-hour ceasefire from 12:00 noon Yemen time (0900 GMT) on Saturday," a statement carried by the official Saudi Press Agency said.

It added that the truce could be extended if the rebels hold fire and allow aid deliveries to besieged loyalist enclaves.

A spokesman for forces allied to the Huthi rebels, Brigadier General Sharaf Luqman, confirmed that they would abide by the ceasefire. "Based on the agreement reached in Muscat, we affirm our commitment to the ceasefire if the other party respects it," Luqman said, referring to the accord signed with Kerry in the Omani capital on Monday.

Six previous attempts to clinch a ceasefire have foundered, the latest in October.

The government of exiled President Abedrabbo Mansour Hadi has been deeply reluctant to accept UN proposals to form a unity administration with the rebels for fear of undermining his legitimacy. The coalition underlined that the ceasefire came at Hadi's request.

The president asked Saudi King Salman for the pause "in response to UN and international efforts to bring peace to Yemen" and allow aid deliveries, its statement said.

More than 7,000 people have been killed in Yemen and nearly 37,000 wounded since the coalition intervention began, the United Nations says.

Millions of civilians are in desperate need of humanitarian aid. Many have fled their homes.

The coalition has enforced an air and sea blockade on rebel-held areas throughout its intervention. That will remain in place for the duration of the ceasefire, it said. Despite the support of coalition firepower, the government's writ is still largely confined to the south and areas along the Saudi border.

The capital Sanaa, the Red Sea coast and most of the northern and central highlands remain in the hands of the rebels and their allies.

The millions of civilians in those areas are dependent on basic goods delivered under UN supervision. Some towns held by loyalist garrisons are under siege by the rebels.

Third city Taez is dependent on a single supply line to the rest of government-held territory that comes under frequent bombardment by the rebels.

The coalition insisted that aid must be allowed into those areas for the ceasefire to be extended. It also demanded that the rebels send representatives to a monitoring committee provided for under a previous, abortive ceasefire.

That committee is to meet just across the border in Saudi Arabia. During their meeting with Kerry on Monday, the rebels and their allies signed an agreement to attend.

"We agree to send representatives to take part in the meetings of the calming and coordination committee," it said.

The border area remains volatile. A Saudi guard was killed on Thursday when a missile launched from Yemen crashed into a border post in the Asir region.