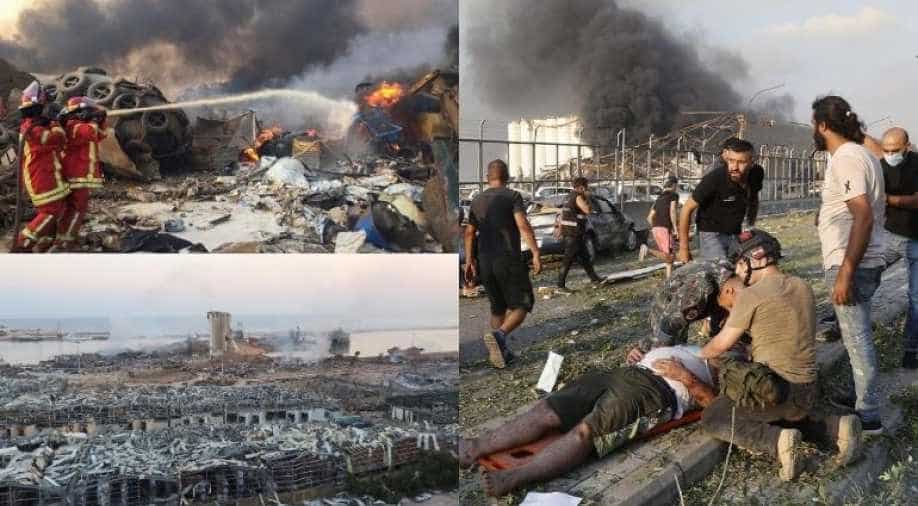 In the region, Gulf nations were among the first to react, with Qatar promising to send field hospitals to support the medical response.

Close allies and traditional adversaries of Lebanon paid tribute on Tuesday to the victims of massive, deadly twin blasts in Beirut, as condolences and offers of help poured in.

Lebanon's Prime Minister Hassan Diab called on "friendly countries" to support a country already reeling from its worst economic crisis in decades and the coronavirus pandemic.

US President Donald Trump said "it looks like a terrible attack" and that US generals had told him that the powerful explosions appeared to have been caused by a "bomb of some kind", without offering evidence.

Secretary of State Mike Pompeo tweeted that "we are monitoring and stand ready to assist the people of Lebanon as they recover from this horrible tragedy".

In the region, Gulf nations were among the first to react, with Qatar promising to send field hospitals to support the medical response.

Egypt expressed "deep concern" at the destruction, and Arab League chief Ahmed Aboulgheit offered condolences, stressing "the importance of finding the truth about the explosions".

And unusually, neighbouring Israel offered humanitarian aid, to a country with which it is still technically at war.

"Defence Minister Benny Gantz and Foreign Minister Gabi Ashkenazi, on behalf of the State of Israel, have offered the Lebanese government, via international intermediaries, medical and humanitarian aid, as well as immediate emergency assistance," a statement read.

Jordan's Foreign Minister Ayman Safadi said Amman was ready to provide any help Lebanon needed, while Iran said it was "fully prepared to render assistance in any way necessary".

"Our thoughts and prayers are with the great and resilient people of Lebanon," Iranian Foreign Minister Mohammad Javad Zarif tweeted. "Stay strong, Lebanon."

Syria's President Bashar Al-Assad wrote to Lebanese President Michel Aoun that "on behalf of the Syrian Arab people, we extend our sincere condolences to you and the Lebanese people".

Outside the region, President Vladimir Putin said that "Russia shares the grief of the Lebanese people," according to a Kremlin statement.

"I ask you to convey words of sympathy and support to the families and friends of the victims, as well as wishes for a speedy recovery to all affected."

French Foreign Minister Jean-Yves Le Drian said the country was "ready to provide assistance according to the needs expressed by the Lebanese authorities".

"All of my thoughts and prayers are with those caught up in this terrible incident," he wrote on Twitter. "The UK is ready to provide support in any way we can, including to those British nationals affected."

Canadian Prime Minister Justin Trudeau wrote on social media to say "we think of all those who were injured in this tragic explosion, as well as those who are trying to find a friend or family member or who have lost a loved one. We're ready to help you."