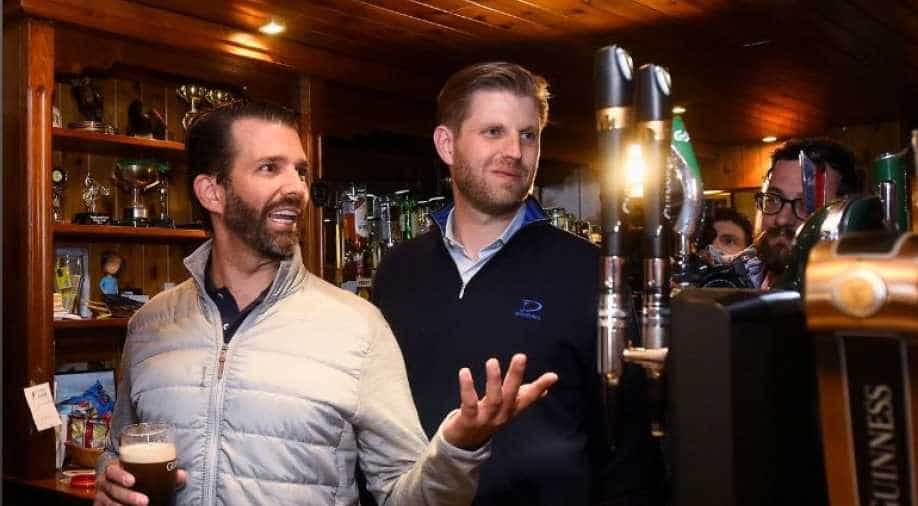 US President Donald Trump's sons Eric and Donald Trump Jr. take a selfie with people during a visit to a local pub in Doonbeg village, Ireland June 5, 2019. Photograph:( Reuters )

Amid a celebratory street party of Irish dancing, Trump's two sons went from pub to pub posing for selfies with kids, shaking hands and buying drinks for all the patrons.

When Eric and Donald Trump, Jr. arrived in the one corner of Ireland celebrating their father's first visit as US president, they had one question for the locals: "Does Doonbeg love Trump?"

Unlike the protests that greeted Trump in London this week, there were no inflatable blimps depicting him as a baby or large statues of him sitting on a golden lavatory, trousers around his ankles, when the president visited the tiny Irish village.

Instead, Doonbeg's residents decked the streets in American flags and stars and stripes bunting, crediting Trump with securing their livelihoods when in 2014 he bought the nearby golf resort where he will spend the next two nights.

Amid a celebratory street party of Irish dancing, Trump's two sons went from pub to pub posing for selfies with kids, shaking hands and buying drinks for all the patrons.

"Everywhere we look all we see is American flags with Irish flags. That's a beautiful thing, It's so nice to see so thank you," Eric Trump told cheering crowds as he served pints from behind the bar at Tubridy's, one of five pubs the brothers visited in the space of an hour.

"God bless Donald Trump," was the response from a satisfied customer at one of the stops while another stood behind the pair's car waving a Trump flag as their motorcade returned to the five-star hotel.

While the main protest for Trump's Irish visit is planned for Dublin on Thursday, on Wednesday it was the adoring locals in Doonbeg who outnumbered the demonstrators that greeted the US president upon his arrival at Shannon Airport.

"I was absolutely delighted. I got to shake Eric Trump's hand twice," said Martin Doyle, 28, a barman from neighbouring Limerick, draped in an American flag and a Trump sweatshirt.

"There is too much negativity in the grand scheme of things, there are a lot of people who wouldn't admit supporting Trump."