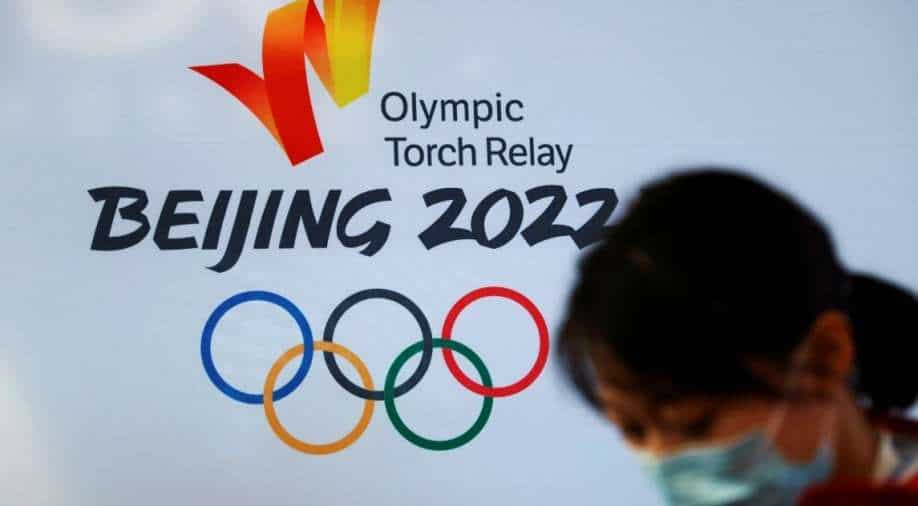 This is a logo of the Beijing 2022 Winter Olympics. Photograph:( Reuters )

IOC president Thomas Bach said that he was staying politically neutral on the matter, insisting that the important point is the "participation of the athletes"

China has warned Australia, the United Kingdom, the United States and Canada, saying that nations would "pay the price" for the diplomatic boycott of the upcoming 2022 Beijing Winter Olympics.

On Monday (December 6), the US announced a diplomatic boycott of the Winter Olympics citing reports of 'egregious' human rights violations, which China has denied repeatedly.

Hours after the United States' announcement, Australia, the UK and Canada also confirmed that they will not send government officials to the Games, which will be held between February 4 to February 20 next year.

However, the athletes of the mentioned countries will participate as scheduled.

In the aftermath, Wang Wenbin, a spokesperson at the Chinese foreign ministry told a regular news conference: "The United States, Britain and Australia have used the Olympics platform for political manipulation. They will have to pay the price for their mistaken acts."

Meanwhile, France on Thursday said it will not be boycotting the Games, adding that violations of human rights in China must be condemned. French Education Minister Jean-Michel Blanquer told BFM TV: "As for a diplomatic boycott... France will not do it... Sports is a world in itself, which must be protected from political interference, otherwise... we can end up by killing the competition."

It is important to note that International Olympic Committee (IOC) president Thomas Bach said Wednesday (December 8) that he was staying politically neutral on the matter. He insisted that the important point is the "participation of the athletes in the Olympic Games".

The Chinese Embassy in Australia issued a statement saying that 'mountains can not stop the river from flowing into the sea' afrer Australia's decision.

In the statement, the embassy blamed Australia for the current predicament of China-Australia relations, stating that the onus lies "squarely on the Australian side".

Wishing the Australian athletes "excellent performance" for the Winter Olympics, the embassy said that they believe athletes will witness a streamlined and safe Olympics in China.