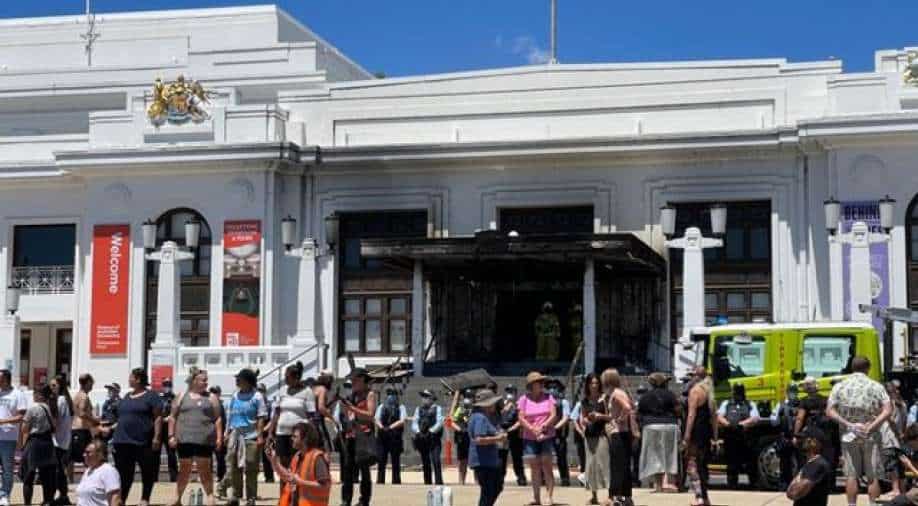 The building was the seat of Australia’s federal Parliament between 1927 and 1988 Photograph:( Twitter )

The blaze took place when a small group of protesters assembled outside the building, calling for fair treatment of indigenous people

Australia’s Old Parliament House caught fire on Thursday, damaging the entrance and the exterior of the building amid slogans of “let it burn” by the protesters.

It was not immediately clear as to who was responsible for the fire, but several local media reports indicated that the blaze took place when a small group of protesters assembled outside the building, calling for fair treatment of indigenous people.

A group named MMAMV Australia — for Millions March Against Mandatory Vaccinations — live-streamed the fire on Facebook, using the hashtag #takeoldparliament.

Other posts using the hashtag focused on colonial invasion and fighting a tyrannical empire.

According to reports, the vast majority of the edifice remained untouched, and the blaze was said to have been quickly extinguished.

There was no immediate news about the extent of the damage.

More footage of people watching as a fire consumes the front entrance to Old Parliament House in Canberra. Police and other agencies will have lots of footage to work with as they investigate. pic.twitter.com/xwbhlpB5zM

The building was the seat of Australia’s federal Parliament between 1927 and 1988. It houses the Museum of Australian Democracy and is a popular tourist attraction in Canberra.

“Old Parliament House was evacuated earlier today after protestors started a fire at the front doors of the building - this was quickly extinguished by ACT fire & rescue,"  ACT police said in a statement.

“There has been ongoing protest activity at the front of Old Parliament House throughout the past fortnight,” it added.

The museum said in a statement that it is "closed until further notice while we address fire damage caused by protesters today."

"No matter your race, your religion, your belief in this country, no one has the right to damage property demonstrating, particularly a symbol of our democracy which hundreds of thousands of Australians died defending," he said.