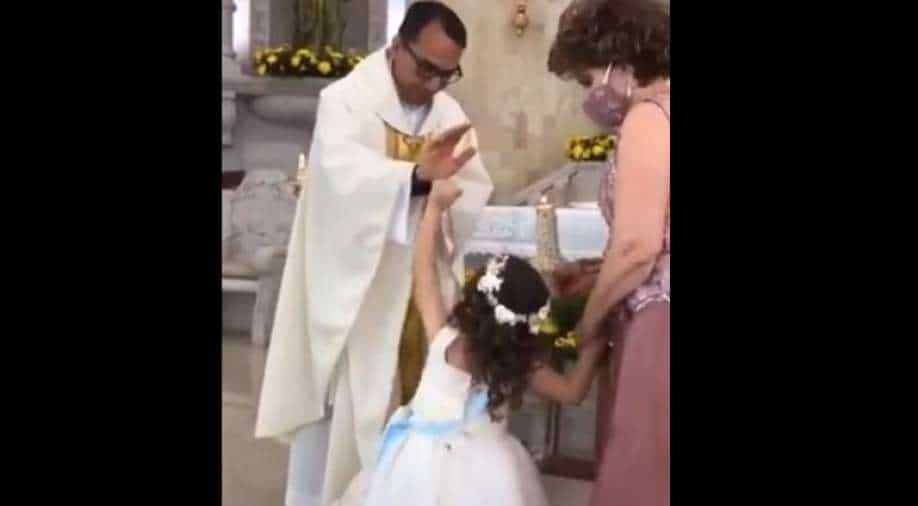 Little girl high-fives priest who had raised his hand to give her blessing Photograph:( WION Web Team )

'My son did this on his first day of school this year when the principal showed him how to hold his hands to be sanitized,' another user shared his experience

Little children are innocent and peppy, and this leads to creating of memories that we can always look back at and smile.

In one such act of innocence, a little girl dressed in a white frock and a white mask gave a high-five to the priest during a ceremony.

The priest can then be seen trying to control his laughter as the onlookers burst into small giggles.

Father is saying a blessing.

The innocence of a child.

They’re trying not to laugh.

The video, which was posted on TikTok and Twitter, took the internet by storm as people shared and commented about the little act of innocence.

In the video, the girl was seen wearing a white coloured frock with a mask and was accompanied by her mother who then holds the girl's hands while she later stands still waiting for the priest to finish his prayer.

The Twitter post was shared several times with many others commenting about similar incidents where their children had also done the same with one user telling "My son did this on his first day of school this year when the principal showed him how to hold his hands to be sanitized."