Watch: Belarus protest leader dances in court during her trial 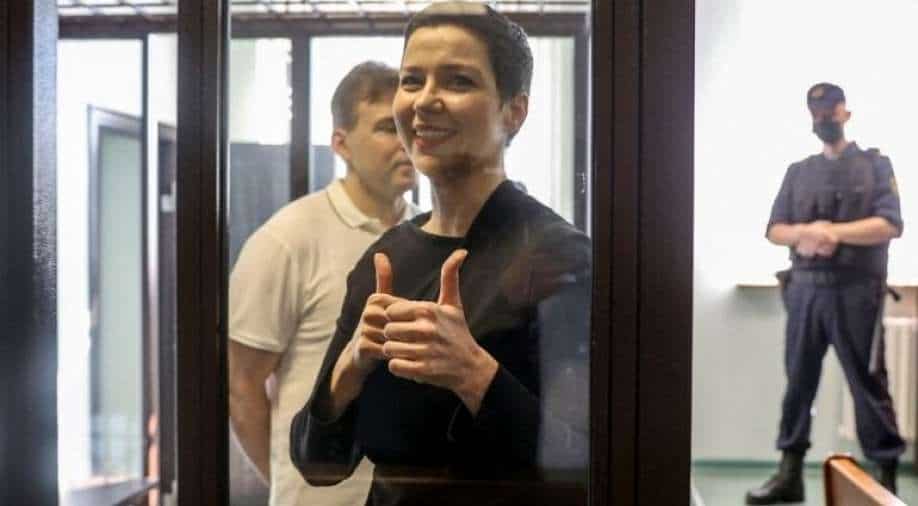 Maria Kolesnikova, the last remaining protest leader still in Belarus, gestures inside the defendants' cage at the opening of her trial on charges of undermining national security, conspiring to seize power and creating an extremist group, in Minsk on August 4, 2021. Photograph:( AFP )

Dressed in all black and her signature red lipstick, as her trial began, Maria Kolesnikova was seen smiling and dancing, while making heart signs through hand gestures from behind the glass partition

The last remaining protest leader of Belarus, Maria Kolesnikova, danced in the court as her trial started on Wednesday.

Kolesnikova, the 39-year-old, is a former flute player who has rose to fame as a symbol of protest in Belarus. She was arrested in September 2020 after she resisted forced deportation by the KGB security service by tearing up her passport.

She was accused of violating national security after she challenged the Belarus leader Alexander Lukashenko’s rule. The autocratic leader has been arresting all opposing voices after last year’s elections.

Dressed in all black and her signature red lipstick, as her trial began, she was seen smiling and dancing, while making heart signs through hand gestures from behind the glass partition.

She faces absurd charges of attempting to overthrow the government, + 12 yrs in prison

Trial is closed.
Priceless video clip of her defiance:

In the video, she can be seen smiling and keeping a positive attitude with her lawyer Maxim Znak as her trial started at a closed court in the Belarusian capital.

If convicted, the two may face 12 years of a jail sentence.

This happened while Belarus government has been facing criticism for following an autocratic form of government after Lukashenko's government tried to forcibly bring back Olympic athlete Krystsina Tsimanouskaya who openly criticised her state-appointed coaches. She accused her coaches of entering her into a race without informing her.

Tsimanouskaya was also one of more than 2,000 Belarusian Olympic athletes who had signed an open letter demanding freeing of political prisoners and had also called for fresh and fair elections.