US comedian sacked by CNN over grisly Trump stunt 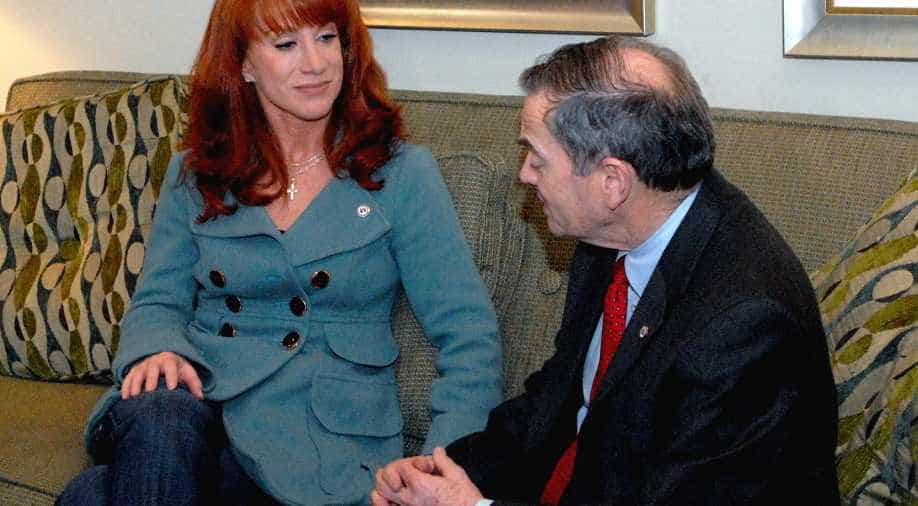 US comedian Kathy Griffin may have hoped to make art in holding up a prop depicting Donald Trump's bloodied, severed head. But the stunt cost her a job with CNN and achieved the unthinkable -- uniting conservatives and liberals in outrage.

The president castigated the comedian on Wednesday, saying she "should be ashamed of herself" for the grisly-looking photograph.

"My children, especially my 11 year old son, Barron, are having a hard time with this. Sick!" he tweeted.

It didn't matter that the outspoken Trump critic and award-winning performer had already apologized and asked celebrity photographer Tyler Shields to remove the picture from the internet. It was not enough to save her job.

"CNN has terminated our agreement with Kathy Griffin to appear on our New Year's Eve program," the network's communications division announced.

CNN had earlier called the picture "disgusting and offensive, "and said it was "evaluating" its annual New Year's Eve coverage, which Griffin co-hosted for a decade with Anderson Cooper. The CNN anchor slammed the image as "completely inappropriate."

First Lady Melania Trump also criticized Griffin, who has twice won Emmys for her reality show "My Life on the D List."

"As a mother, a wife, and a human being, that photo is very disturbing," she said in a rare statement.

"When you consider some of the atrocities happening in the world today, a photo opportunity like this is simply wrong and makes you wonder about the mental health of the person who did it," she added.

The Secret Service also said it would look into the incident, tweeting that threats against protectees "receive the highest priority of all of our investigations."

In a 31-second video posted to social media late Tuesday, Griffin said: "I beg for your forgiveness. I went too far. I made a mistake and I was wrong."

But the 56-year-old was initially more defiant.

"I do not condone any violence... I'm merely mocking the mocker in chief," Griffin tweeted later. Both messages have since been deleted and the photograph has been removed from her social media account.

Trump's eldest son Donald Jr, who runs the family business in New York, and Mitt Romney, the defeated 2012 Republican presidential nominee, were among those conservatives who slammed the photograph.

"Our politics have become too base, too low & too vulgar, but Kathy Griffin's post descends into an even more repugnant & vile territory," Romney tweeted.

Even Trump critics vented their disapproval.

"It is never funny to joke about killing a president," tweeted Chelsea Clinton, the daughter of former president Bill and Trump's election rival Hillary.

"I think she was thinking she was making some artistic statement, but that image has no place in our political dialogue," Al Franken, a Democratic senator from Minnesota and a former comedian on long-running television show Saturday Night Live, told MSNBC.

Shields has not commented publicly since the controversy broke. He is listed on his website as an artist and "Hollywood's favorite photographer" who has evolved from being the "bad boy of photography."

US newspapers were scathing on the editorial pages.

"In a strange way Griffin's shameful stunt might have given Americans their greatest moment of unity since Trump's unexpected election," wrote USA Today.

"Those who hate Trump with all their gut, and recoil at the crass and nasty direction he's taken our politics, should be the first to condemn imagery that normalizes violence against him," said the New York Daily News.