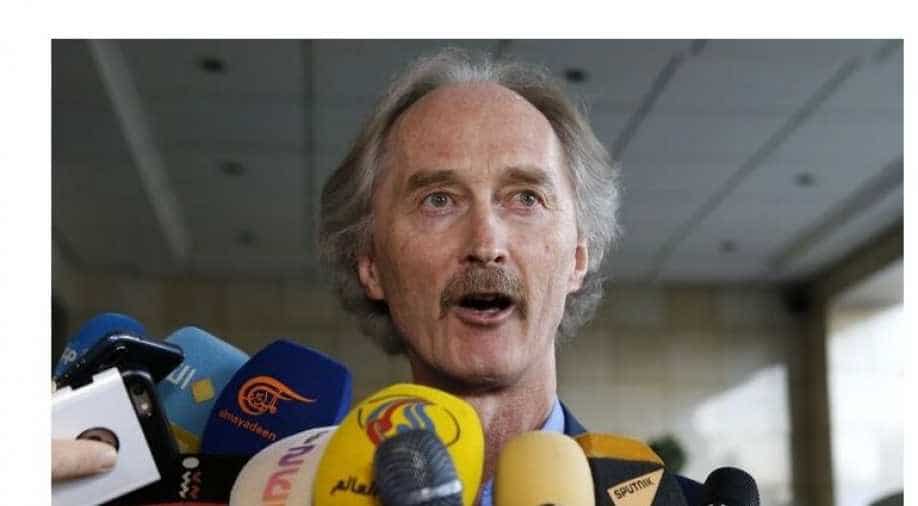 United Nations special envoy to Syria Geir Pedersen speaks to journalists upon his arrival in the Syrian capital Damascus on September 22, 2019. Photograph:( AFP )

Numerous rounds of the UN-led peace talks have failed to end a war that has killed more than 370,000 people and displaced millions since erupting in 2011 with the repression of anti-government protests.

The United Nations special envoy for Syria arrived in Damascus on Sunday for fresh talks on forming a committee tasked with drafting a new constitution for the war-ravaged country.

Geir Pedersen was set to meet with Foreign Minister Walid Muallem on Monday to discuss the committee, the UN-backed push for which has been bogged down by disagreements with President Bashar al-Assad's government over the make-up of the body.

On arrival in the Syrian capital, Pedersen said he was "looking very much forward" to his meeting with Muallem, recalling the "productive meetings" they had during his last visit in July.

The Norwegian diplomat, who took up the role in January, said progress has been made since.

On Wednesday, the UN Secretary-General Antonio Guterres said an agreement had been reached concerning the formation of the body.

The committee is set to include 150 members, a third picked by the regime, another by the opposition and the remaining third by the UN.

Besides its composition, the mechanisms that will govern the committee's work have yet to be agreed upon, prompting fears among diplomats that concrete progress is still months away.

According to the pro-Damascus daily Al-Watan, Pedersen could make a formal announcement on the constitutional committee at the UN General Assembly, which opens in New York this week.

Numerous rounds of the UN-led peace talks have failed to end a war that has killed more than 370,000 people and displaced millions since erupting in 2011 with the repression of anti-government protests.

With key military backing from Russia, Assad's forces have retaken large parts of Syria from rebels and jihadists since 2015, and now control around 60 percent of the country.