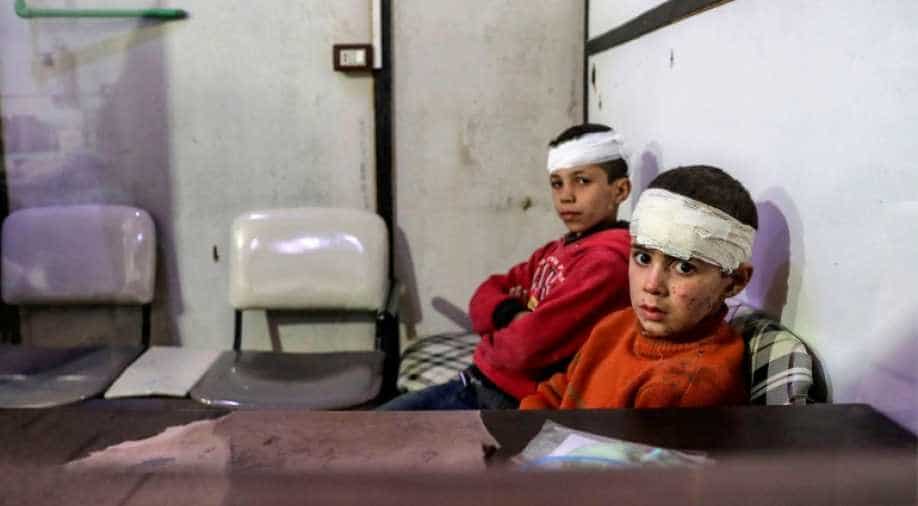 Children who were injured in bombings on eastern Ghouta, wait at a hospital in Douma, Syria. Photograph:( Agencia EFE )

The Executive Director of the UN Children's Fund, Henrietta Fore, said in a statement dated Monday that these are the verified figures and the real ones are 'likely much higher'.

UNICEF on Sunday warned that 1,106 children died during fighting in Syria in 2018, the deadliest year for children since the war began eight years ago and called on the parties involved in the conflict to prioritize the protection of children.

The Executive Director of the UN Children's Fund, Henrietta Fore, said in a statement dated Monday that these are the verified figures and the real ones are "likely much higher," and called for support for the donors' conference in Brussels which starts on March 12.

"Today, there exists an alarming misconception that the conflict in Syria is drawing quickly to a close - it is not. Children in parts of the country remain in as much danger as at any other time during the eight-year conflict," she said in the statement.

UNICEF points out that mine contamination is the leading cause of child casualties in Syria and unexploded ordnance accounted for 434 deaths and injuries last year, while there were a record number of attacks on education and health institutions, 262 in total.

Fore said she was "particularly concerned about the situation in Idlib in northwestern Syria where intensification of violence has reportedly killed 59 children in the past few weeks alone."

She noted that children and families "in no man's lands continue to live in limbo" and in Rukban, near the Jordanian border, their situation "continues to be desperate, with limited access to food, water, shelter, health care and education."

She also warned of worsening conditions in the Al Hol camp in the north-east of Syria, which is home to more than 65,000 people, of whom some 240 are unaccompanied or separated children.

"Since January this year, nearly 60 children reportedly died while making the 300-kilometre trek from Baghouz to the camp," UNICEF said.

The UN agency also draws attention to the future of children of foreign fighters in Syria, which "remains unclear", and calls on member states to take responsibility for those children who are their citizens or descendants of their nationals and to take measures to prevent them from becoming stateless.

The neighbouring countries of the region, meanwhile, are home to 2.6 million Syrian refugee children, many of whose families, despite the help of host governments and the UN, cannot send them to school and resort to child labour or child marriage due to lack of income.

As Syria faces its ninth year of the war, UNICEF "again reminds parties to the conflict and the global community that it is the country's children who have suffered most and have the most to lose. Each day the conflict continues is another day stolen from their childhood."

Fore, therefore asks to prioritize "the protection of all children, no matter who controls which area" and regardless of the affiliations of their families, promoting access to families in need of support and solutions for those who voluntarily choose not to return and maintaining stable funding.

On the eve of the donors' conference in Brussels, Fore urged them "to maintain their generosity towards the children of Syria and neighbouring countries. Predictable, unrestricted, multi-year funding is required to meet the immediate and longer-term needs of children and their families inside Syria and across the region."