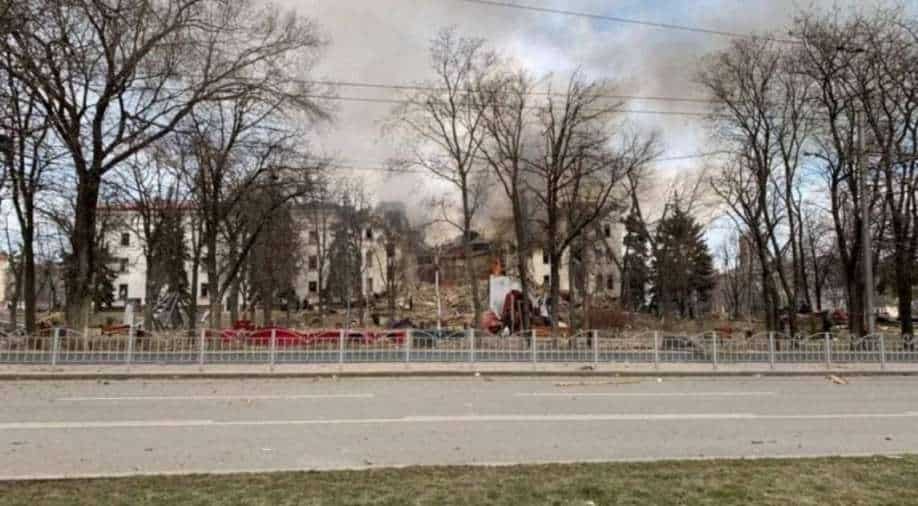 A view shows Donetsk Regional Theatre of Drama destroyed by an airstrike amid Russia's invasion of Ukraine, in Mariupol, Ukraine, in this handout picture obtained by Reuters on March 16, 2022. Photograph:( Reuters )

As per the satellite images of the theatre taken on March 14, the word "children" was clearly etched out in the ground in Russian on either side of the building

Russia continues to intensify the invasion of Ukraine with increased shelling and airstrikes. On Thursday (March 17), US and Ukrainian officials have said that Russian forces killed civilians waiting in line for bread and sheltering in a theatre in the besieged port city of Mariupol.

Mariupol city authorities said in a statement on Telegram, "Russia purposefully destroyed the Drama Theatre, where hundreds of people are hiding."

The foreign ministry of Ukraine said that Russian forces dropped a powerful bomb on a theatre. The bombing left many civilians trapped and an unknown number of casualties.

As per a photo released by officials of the theatre building, the middle part can be seen completely destroyed. A cloud of thick white smoke can be seen rising from the rubble. The bomb was apparently dropped on the building from an airplane.

The official statement read: "It is impossible to find words to describe the level of cynicism and cruelty, with which Russian invaders are destroying peaceful residents of a Ukrainian city by the sea." 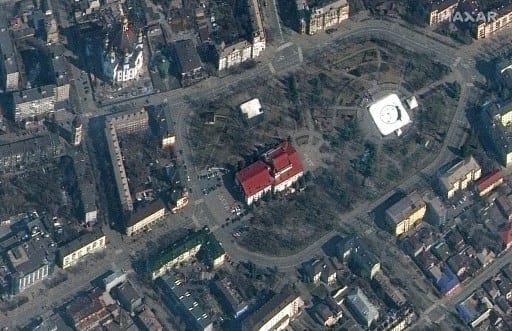 BBC reported citing the deputy mayor Sergei Orlov that around 1,000 people had sought refuge in the building, however, the number of casualties could not be confirmed.

Local authorities say at least 2,400 people have been killed in Mariupol since the start of the war.

Meanwhile, Russia's defence ministry denied that its forces bombed the city on Wednesday and stated the building was destroyed in an explosion set off by Ukraine's nationalist Azov battalion.

Ukrainian Foreign Minister Dmytro Kuleba shared before and after images that showed the extent of the destruction. He said, Another horrendous war crime in Mariupol. Massive Russian attack on the Drama Theater where hundreds of innocent civilians were hiding."

"The building is now fully ruined. Russians could not have not known this was a civilian shelter. Save Mariupol! Stop Russian war criminals!" he added.

Another horrendous war crime in Mariupol. Massive Russian attack on the Drama Theater where hundreds of innocent civilians were hiding. The building is now fully ruined. Russians could not have not known this was a civilian shelter. Save Mariupol! Stop Russian war criminals! pic.twitter.com/bIQLxe7mli