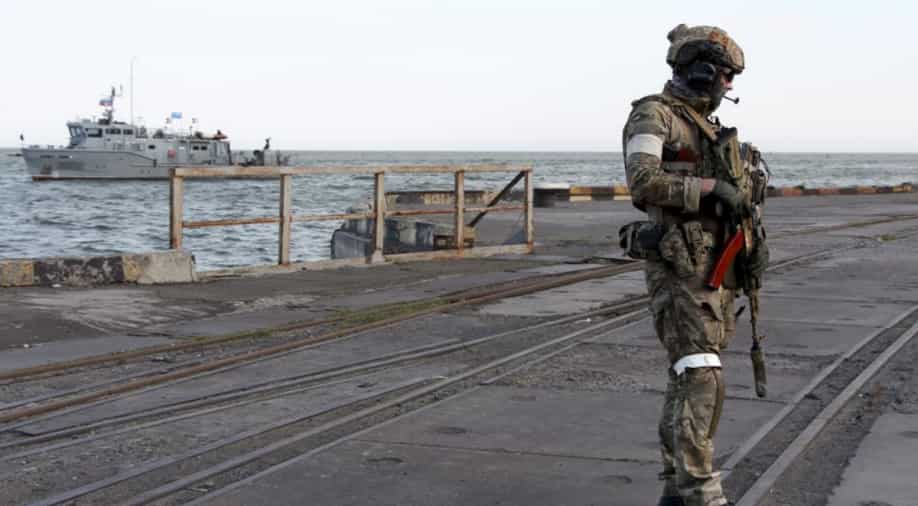 A Russian serviceman stands guarding an area of the Mariupol Sea Port in Mariupol, in territory under the government of the Donetsk People's Republic, eastern Ukraine Photograph:( AFP )

After claiming to have captured the nearby rail hub of Lyman, Russia has intensified its offensive and has claimed to have surrounded the urban centre of Severodonetsk

Ukrainian President Volodymyr Zelensky has said that the situation is ''indescribably difficult'' in Donbas and Kharkiv due to the Russian onslaught on the two regions.

After claiming to have captured the nearby rail hub of Lyman, Russia has intensified its offensive and has claimed to have surrounded the urban centre of Severodonetsk.

Denying the claim, a Ukrainian official said that the Ukrainian Army had repelled Russian forces from the outskirts of the key city.

Highlighting that Ukrainian defences in the east were "still holding up", Zelensky said that Kyiv is approaching the point where it would outnumber the Russians both technologically and in terms of its ability to strike.

Condemning Russia's "barbaric" strikes in the northeastern Sumy region, Zelensky said ''Ukraine will get everything back.''

Sievierodonetsk and nearby Lysychansk are the last areas under Ukrainian control in Luhansk, one of two provinces that make up the Donbas, where Zelensky has accused Moscow of carrying out a "genocide".

Russia has been waging an all-out war for the eastern Donbas, Ukraine's industrial heartland, after setbacks in its attacks on Kyiv and Kharkiv.

“If the occupiers think that Lyman or Sievierodonetsk will be theirs, they are wrong. Donbas will be Ukrainian,” Zelensky said in his address.

According to a statement issued by the Russian defence ministry, "The town of Krasny Liman has been entirely liberated from Ukrainian nationalists."

Russian President Vladimir Putin, who calls his attack on Ukraine a ''special military operation'', has the West against ramping up arms supplies to Ukraine saying that it would be "dangerous" and risk "further destabilisation".