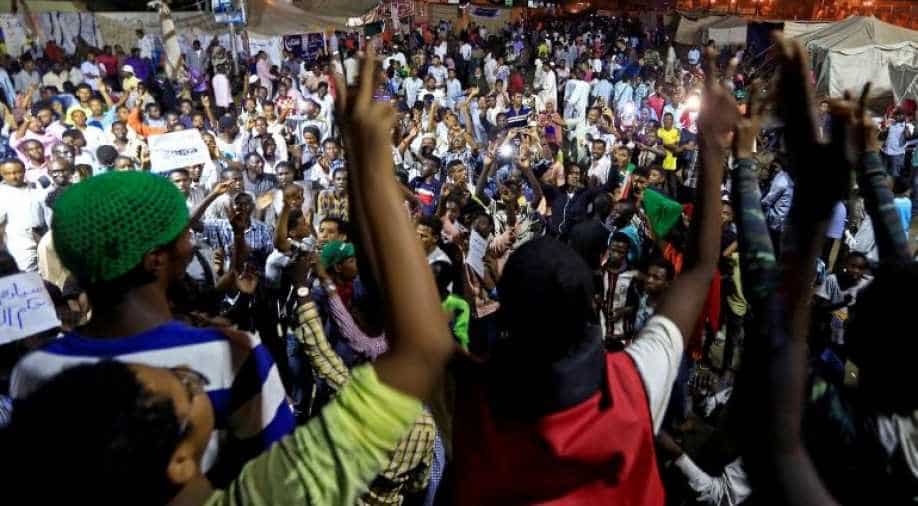 Sudanese protesters attend a demonstration along the streets of Khartoum, Sudan. Photograph:( Reuters )

Talks were adjourned in the early hours of Tuesday, with no date set for resumption, but sources said contacts were continuing at a low level trying to reach a compromise.

A coalition of Sudanese protest and opposition groups on Friday called for two days of strikes in private and public enterprises next week as part of the pressure on military rulers to hand over power to civilians.

The announcement, issued in a statement posted on social media, comes after talks between the Transitional Military Council (TMC) and an alliance of protest groups on the composition of a sovereign body to lead the country during a three-year transition to democracy.

Talks were adjourned in the early hours of Tuesday, with no date set for resumption, but sources said contacts were continuing at a low level trying to reach a compromise.

Last month, Sudan's military overthrew President Omar al-Bashir following months of protests against his three decades in power. The military has promised to hand over power to an elected government after a transitional period.

Sudan, one of Africa's largest countries, is important for efforts to bring stability to an important area stretching from the Horn of Africa to Libya.

In a statement distributed on social media, the Declaration of Freedom and Change Forces (DFCF) called for a strike starting at private and public enterprises that will include various professional sectors starting on Tuesday.

"The strike will continue for two days, and involved gathering at the protest squares in the national and state capitals," the statement said.

The transitional military council has called for establishing a civilian government of technocrats. It has also said it was ready to share power with civilians in a transitional sovereign body but has been demanding overall control of the body.

A representative of the Justice and Equality Movement (JEM) in the DFCF said both sides were looking at proposals to break the impasse, including a rotating presidency, and for decisions to be made by a two-thirds majority rather than a simple majority, adding that a deal could be reached before next Tuesday.

In remarks published on Wednesday, the deputy head of the transitional council told an Egyptian newspaper that the military wanted to hand power to a democratically elected government as soon as possible.

But Mohamed Hamdan Dagalo, who is widely known as Hemedti and leads the feared paramilitary Rapid Support Forces (RSF), said the military was impatient for a solution.