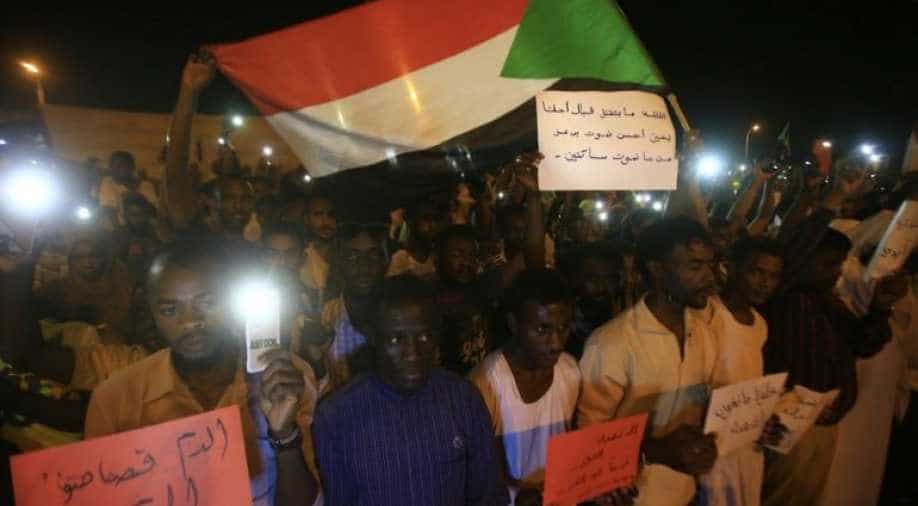 Sudanese protesters gather near the military headquarters in the capital Khartoum. Photograph:( AFP )

The military council had announced the previous night that the new round of talks would be held at the presidential palace in Khartoum.

Sudan's protest movement said that it is determined to have a civilian as head of a new governing council ahead of negotiations Sunday with army rulers to finalise its makeup.

Talks between the current ruling military council and the protest movement over the planned transfer of power are set to resume amid international pressure to return to the table after the generals suspended the negotiations earlier this week.

The Alliance for Freedom and Change, the umbrella group that brought down autocratic leader Omar al-Bashir after months-long protests against his three-decade rule, said the talks were set to begin at 9:00 pm (1900 GMT) Sunday.

The military council had announced the previous night that the new round of talks would be held at the presidential palace in Khartoum.

"The talks will revolve around outstanding issues concerning the representation in the sovereign counsel and its chairmanship," the alliance said in a statement.

The generals and protest leaders are at loggerheads over the final composition of the next ruling body, the thorniest issue so far in negotiations between the two sides.

The generals insist the new body be military-led but the protest leaders are determined to have a majority civilian body.

On Sunday the protest movement said it is determined to have a "civilian sovereign council led by a civilian as its chairman and having a limited military representation".

The current military council that took power after ousting Bashir on April 11 is headed by General Abdel Fattah al-Burhan, and the generals negotiating with protesters have previously said that Burhan would lead the new governing body too.

Before talks were suspended the two sides had agreed on several key issues, including a three-year transition period and the creation of a 300-member parliament, with two-thirds of lawmakers to come from the protesters' umbrella group.

But Sunday's negotiations come against the backdrop of rising tension after hundreds of supporters of several Islamic movements rallied outside the presidential palace to reject any civilian administration deal that excludes the Islamic law sharia as its guiding principle.

The Alliance for Freedom and Change has so far remained silent on whether sharia has a place in Sudan's future, arguing that its main concern now is installing a civilian administration.