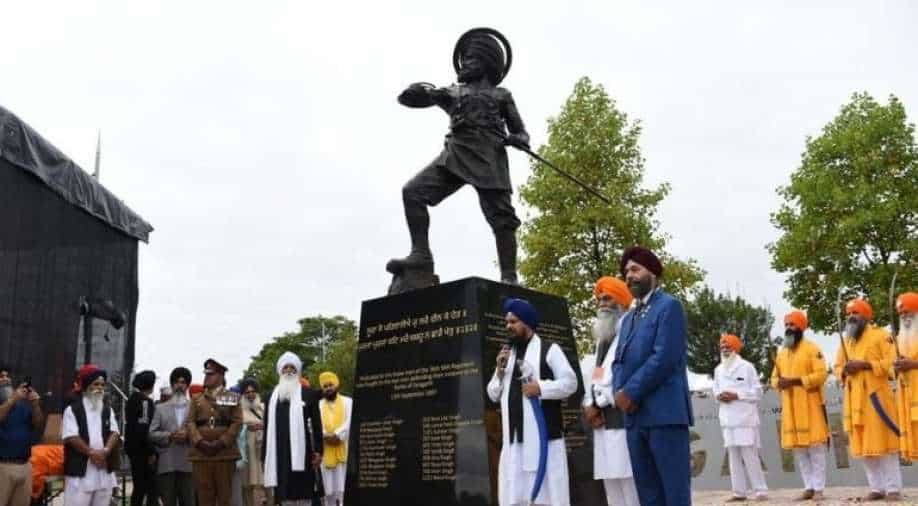 The 10-feet-tall bronze statue of Havilder Ishar Singh has been installed atop a six-feet plinth with the names of all martyrs of the Saragarhi battle inscribed on it. Photograph:( Twitter )

A life-size bronze statue of Havildar Ishar Singh was unveiled at Guru Nanak Gurdwara in Wednesfield, a suburb of Wolverhampton, UK, on the 124th anniversary of the battle of Saragarhi.

This is the first memorial of its sort in the United Kingdom, honouring the valour of 19th-century Sikh troops.

On September 12, 1897, 21 troops from the British Indian Army's 36th Sikh Regiment fought against tens of thousands of Afghan tribesmen.

The 21 Sikh soldiers, led by Havildar Ishar Singh, chose to fight to the death rather than surrender.

The conflict was concentrated on a Saragarhi garrison that was encircled and attacked by tribesmen.

Instead of surrendering, the 21 men inside the outpost, led by Havildar Ishar Singh, elected to fight to the death.

A third individual, Khuda Dhad, a Muslim chef and handyman who was not registered as a soldier but worked for the British Army, was also killed after opting to fight to defend the outpost.

Military historians consider the war to be one of the greatest last stands in history. 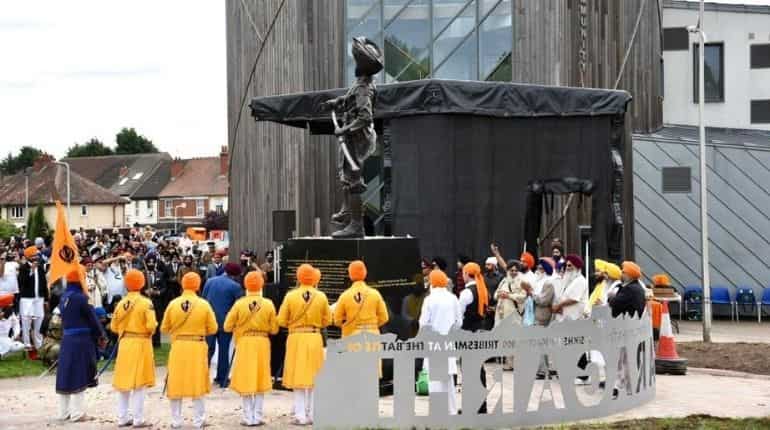 Every year on September 12, the Indian Army's 4th battalion of the Sikh regiment commemorates Saragarhi Day.

The monument, which was commissioned by the Guru Nanak Gurdwara Wednesfield after Wolverhampton Council agreed to transfer land, was officially unveiled by the Jathedar of the Akal Takht, Giani Harpreet Singh.

🎥 This is the moment Wolverhampton’s historic Battle of #Saragarhi Monument was unveiled in Wednesfield earlier today… pic.twitter.com/jgirpoQ8b2

At the unveiling of the memorial, Singh was joined by three soldiers' descendants, the President of the Saragarhi Foundation, Doctor Gurunderpal Singh Josan, Major General Celia Harvey OBE of the British Army, and local dignitaries.

Councillor Bhupinder Gakhal, Cabinet Member for City Assets and Housing at City of Wolverhampton Council and ward member for Wednesfield South, worked closely with the Gurdwara to develop plans for the memorial.

He said: "This is a truly historic moment and one that will live in the memory of the many people who attended today. We have unveiled a remarkable and beautiful tribute to those who made the ultimate sacrifice.

"The 21 Sikh soldiers, and the Muslim cook who joined their ranks, showed incredible bravery. I hope this wonderful memorial will encourage more people to learn about what happened and about the brotherhood and sense of loyalty shared by those men who fought to the end.

"Our Saragarhi Memorial will be very important to a very large number of people-in Wednesfield, in Wolverhampton and across the world. This importance has been recognised by the wide variety of very important guests we have welcomed today."