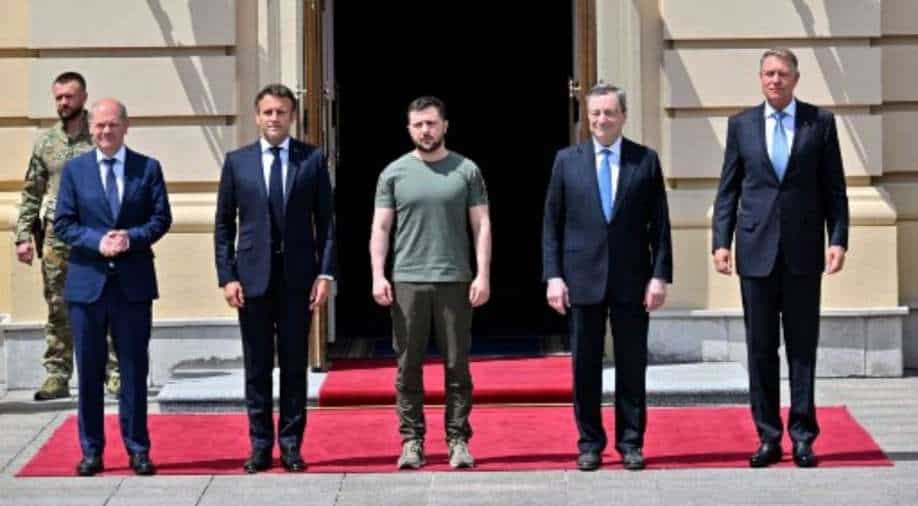 In a response to a crucial high-profile visit of European leaders to a war-damaged Ukrainian town of Irpin, Kremlin said on Thursday (June 16) that it hoped the leaders of France, Germany and Italy would discuss matters other than the supply of weapons to Ukraine.

While speaking with reporters in a call, Kremlin spokesperson Dmitry Peskov said that Emmanuel Macron, Olaf Scholz and Mario Draghi should use their time with Ukrainian President Volodymyr Zelensky to take a "realistic look at the state of affairs".

Kremlin also warned against new Western weapons supplies to Ukraine. Peskov said that such supplies would be "absolutely useless and will cause further damage to the country". Russia has said multiple times that high-precision weapons supplied by NATO nations have aggravated the Russia-Ukraine conflict.

Meanwhile, Zelensky welcomed the leaders who arrived in Kyiv on a train to show support to the war-torn nation. German Chancellor said that Zelensky would take part in this month's Group of Seven summit being held June 26 to 28.

While speaking to reporters at Kyiv train station, Macron said that he had a "message of European unity addressed to Ukrainian men and women."

This particular visit plays a pivotal role at a time when several European countries are being blamed for not providing Ukraine with the scale of arms and weapons that Zelensky has been asking for.

Italy will 'rebuild everything'

ItalianPM said that he will "rebuild everything" after the leaders waked through the ruined buildings of the Ukrainian town of Irpin.

"They know exactly where the sites that need to be rebuilt are. Each family has an app where they describe what happened, and they are already in a very advanced state," he added.