Postal service struggles to speed up delivery, compounding its troubles 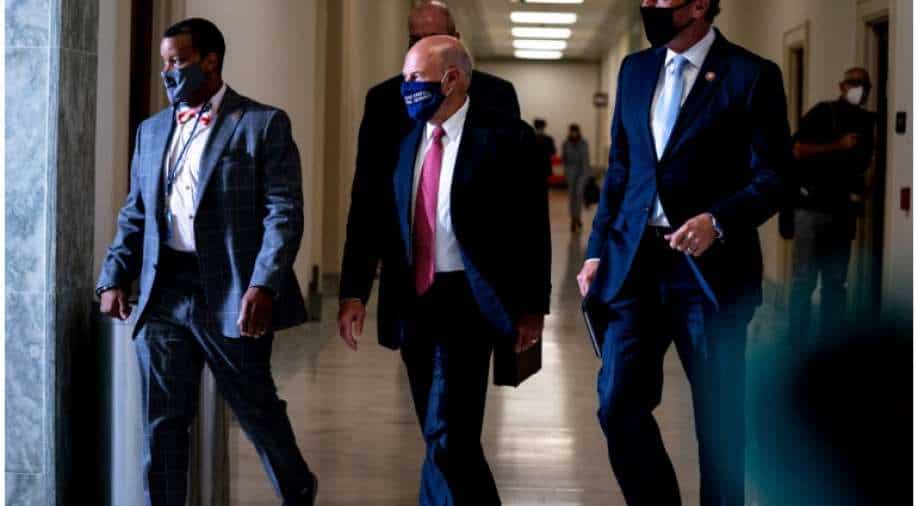 FILE -- Postmaster General Louis Dejoy, center, departs after testifying about changes to the Postal Service, at a hearing of the House Oversight and Reform Committee in Washington, Aug. 24, 2020. Months after the election highlighted the U.S. Postal Service's problems, delivery times are still falling short of its standards, and a plan to try to shore up its finances could further slow some mail. (Anna Moneymaker/The New York Times) Photograph:( The New York Times )

Months after an election that thrust problems at the Postal Service into the national glare, the beleaguered agency has failed to restore its target delivery times

William Pietri, a software engineer in San Francisco, put careful thought into his Christmas box for his family in Michigan, jamming it with tastes from around the world and other gifts: Indonesian ginger candy, Mexican saladitos con chile, Korean honey butter almonds, a puzzle that was almost impossible to find.

But about three months later, the package has never arrived. According to the U.S. Postal Service, it is still “in transit, arriving late.”

Pietri, 51, is left to guess at the cause. The coronavirus pandemic? The politicization of the Postal Service under former President Donald Trump? “Well-informed delays, I would be happy with, but this great mystery is deeply frustrating,” he said.

Months after an election that thrust problems at the Postal Service into the national glare, the beleaguered agency has failed to restore its target delivery times. In mid-December — awash in Christmas and New Year’s greetings — the agency delivered as little as 62% of first-class mail on time, the lowest level in years, according to Postal Service data. The rate had rebounded to 84% by the week of March 6, but remained far below the agency’s target of about 96%.

“It hasn’t really gotten better as much as we would have hoped at this point,” said Dave Lewis, the president of SnailWorks, a company that tracks commercial mail and has found that delivery now takes four to five days, after years of averaging 3.5. “It just seems that the Postal Service just hasn’t come to grips with this and hasn’t been able to dig themselves out of it yet from the problems they had in December.”

The delays are compounding problems at a venerable American institution already teetering under widening financial losses, polarizing leadership and questions about what the Biden administration will — or even can — do to right the ship. And they may be a precursor of even worse delays to come as the Postal Service reaches a potential inflection point: The agency cannot fix its finances without addressing its service problems, and it cannot address its service problems without fixing its finances.

Already the postmaster general, Louis DeJoy, is completing a soon-to-be-released plan to stabilize the agency’s finances over 10 years that is expected to prioritize reliability and cost effectiveness over speed. In part, that could mean people like Pietri no longer find their Christmas gifts lost in transit, but it almost certainly would slow the delivery of some mail even further.

DeJoy’s report is expected to propose eliminating the use of planes for the first-class mail service to transport letters and other flat mail in the contiguous United States, according to someone familiar with the planning. It is also expected to propose lengthening the agency’s standard delivery time for first-class mail, which includes many envelopes and lightweight packages, from within three days to within five days.

Among other ideas under consideration: shuttering processing facilities and reducing some post office hours. DeJoy told lawmakers last month that price increases would also be part of the strategy. The plan is part of a concerted effort by the agency to shift its resources to shipping packages, which have become a growing share of its business as traditional mail volumes have declined.

The plan, some details of which were reported earlier by The Washington Post, aims to address longer-term problems at the agency. Although recent months have been particularly dire, the Postal Service has not met its mail delivery service standards for more than eight years.

The proposal is almost certain to prompt resistance from the Democrats who control Congress and the White House, but it is also unclear what they will do about it.

DeJoy, a former logistics executive and Trump megadonor, had already drawn Democrats’ wrath when slowdowns began last year as he instituted operational changes during an election year with a historic influx of mail-in ballots. But President Joe Biden cannot directly fire him. Instead, his fate rests with the Postal Service Board of Governors, minus DeJoy himself, composed entirely of Trump appointees.

Some Democrats have called for Biden to fire all of the governors, and though he may have the legal authority to do so, the president has shown little appetite for such a drastic move after repeatedly criticizing his predecessor for norm-breaking firings across the government. He has nominated three new governors for open spots, but the board does not intend to wait for the confirmation of Biden’s picks to complete its 10-year plan.

The Postal Service has blamed the pandemic and a record holiday peak season for much of the poor service performance. David Partenheimer, a spokesperson for the agency, emphasized that the pandemic had contributed to an industrywide shortage of air cargo capacity, and that for the Postal Service, which does not operate or own planes, air transportation is less reliable and more expensive than ground transportation. He would not comment on the contents of the plan beyond that it would include a review of current delivery service standards.

“Our forthcoming plan to achieve service excellence and financial sustainability for the U.S. Postal Service is designed to strengthen our public service mission,” Partenheimer said in an email early this month. “We will share the final plan’s details in the coming weeks.”

DeJoy has repeatedly stressed the need to improve the Postal Service’s financial status, which has grown increasingly dire as the use of its most profitable product — first-class mail — continues to decline.

In the past 14 fiscal years, the Postal Service has lost $87 billion, including $9.2 billion in the 2020 fiscal year alone, and expects to lose $9.7 billion in 2021. The agency, which is expected to be self-sustaining, “cannot fund its current level of services and financial obligations from its revenues,” the Government Accountability Office said in a report naming the Postal Service to its “high risk” financial list. In July, the service reached an agreement with the Treasury Department on a $10 billion loan as part of a coronavirus relief bill.

But critics question why the postmaster general would slow mail delivery when the agency is already struggling to deliver mail on time and no current members of the Board of Governors have extensive experience at the agency. Michael Plunkett, the president of the Association for Postal Commerce, which represents businesses and organizations that are postal customers, called the proposals as well as efforts to increase prices “a shortsighted and imprudent step by postal management” with service already lagging and a poor economy.

Mark Diamondstein, the president of the American Postal Workers Union, said his group, among the largest Postal Service unions, had not been asked to consult on the 10-year plan as of early this month. The Board of Governors appears to have “no interest” in his union’s input, he said.

With the election over, the Postal Service is no longer encumbered by court orders that limited its ability to institute major operational changes or forced it to disclose on-time delivery rates while ballots passed through its network.

But plenty of customers report delays. Laura Nelson Selinsky, a teacher from King of Prussia, Pennsylvania, said a Christmas card sent on Dec. 11 did not arrive until the middle of January. And even though her husband received a prescription by mail a month late, she said she worried more about how the delays could affect her students at a small private school that specializes in learning disabilities.

In December, she sent packages of goodies to the 12th graders in her British literature class who were reading “Macbeth.” Among those included: Renaissance-era snacks, plastic swords, scripts, headdresses and a chain mail coif, all so the students could act out the play, she said.

But one student did not receive any materials until the unit was largely complete.

“This is such a small thing, to be able to go to the post office and you spend $70 on materials, on priority mailing materials, to students because you really want them to have it for this special event, and you really can’t count on them being there,” Nelson Selinsky said. The Postal Service is “a thing that we should be able to count on, and we just can’t.”

Occasionally, the delays can be a matter of life and death. Naya, a cat with big sage eyes found dumped in a Corona beer box, had a disease caused by a kind of fatal, feline coronavirus treatable only by a drug sold through “the underground cat railroad,” said Daniela Stolfi-Tow, who volunteers for a cat rescue group in Hawaii. They call her the “corona kitten,” she added.

When Stolfi-Tow ordered medication, it was held up in New York and never arrived. The symptoms became apparent: Naya started to lose the ability to walk straight, jerking and falling over.

Stolfi-Tow ordered another shipment held up in California that never arrived, and was preparing to get on a plane herself to pick up the medication. But finally, a third order arrived. It was sent through FedEx.

“I just cried. I was just like, ‘Oh, my God, you saved her life,’ ” she said. “It’s appalling to me that the government has not stepped in and said, ‘Hey, get it together or stop taking packages until you can deal with whatever the problem is.’ ”