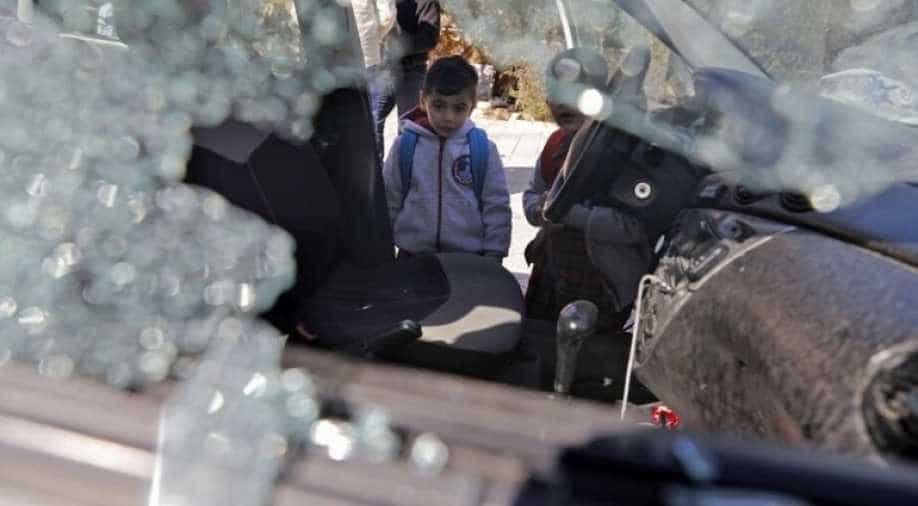 Palestinian children are pictured through a car's shattered window that was damaged during a suspected shooting attack in which an Israeli policeman was lightly injured in Jerusalem's Old City, on February 6, 2020. Photograph:( AFP )

The alleged perpetrator of the car-ramming was arrested Thursday evening after a day-long manhunt. The suspect was not immediately identified.

A third person was killed by Israeli officers inside the Old City in east Jerusalem after firing on police, Israeli officials said.

The alleged perpetrator of the car-ramming was arrested Thursday evening after a day-long manhunt. The suspect was not immediately identified.

The army said it was deploying additional troops across the West Bank ahead of Friday prayers, often a gathering point for Palestinian demonstrations.

The ramming occurred in central Jerusalem shortly before 2:00 am (0000 GMT) where the soldiers had been marching, the army said, adding that one of them was "severely injured".

Public radio said they were recruits on their way to an induction ceremony at Jerusalem's Western Wall, the holiest site where Jews can pray.

The attacker fled to the occupied West Bank but was arrested near the Gush Etzion settlement, Israeli police said.

Before the arrest, Israeli Prime Minister Benjamin Netanyahu visited near the settlement and pledged a firm response.

"Terrorism will not defeat us; we will win!" he said

It was the most serious escalation in violence since US President Donald Trump revealed his peace plan on January 28.

"It was the deal of the century that created this atmosphere of escalation and tension," Nabil Abu Rudeinah said.

Netanyahu hit back, directly addressing Abbas and accusing him of stoking violence.

"This will bring you nothing -- neither the stabbings, car-rammings... or incitement to violence. We will do whatever it takes to keep us safe."

The Islamist Hamas movement, which controls the Gaza Strip and has fought three wars with Israel, hailed the car-ramming as a "practical response" to Trump's plan but stopped short of claiming responsibility.

Trump's plan unilaterally gives Israel most of what it has sought in previous negotiations including an "undivided capital" in Jerusalem.

The plan angered Palestinians, whose leaders called for street protests over what they saw as its pro-Israel bias.

Trump's adviser and son-in-law Jared Kushner were scheduled to meet UN Security Council members on Thursday to present the plan, which he drew up.

Abbas is due to the UN next week to express opposition to the US initiative.

While the initial Palestinian response to the plan saw little violence, tensions have soared in recent days.

The Israeli army said it had gone to the area to demolish the home of a Palestinian involved in the killing of a Jewish settler in 2018.

Troops then shot at Palestinians who had "hurled explosive devices and fired towards them", the army said.

Palestinian security sources said that Abu Tabikh was among the protesters when he was killed, but Badwan was in the courtyard of a police station close to the clashes when he was hit.

Separately a man opened fire on Israeli forces near the Al-Aqsa Mosque in Jerusalem's Old City, with forces responding by shooting him dead.

Police identified the gunman as an Arab resident of northern Israel who recently converted to Islam and is known to authorities over previous crimes.

The army said that it had decided to "reinforce Judea and Samaria Division with additional combat troops", using the biblical terms for the West Bank.

Since Trump's plan was announced, there has been almost daily fire from Gaza into southern Israel, drawing Israeli retaliation.

There have been no reported casualties.