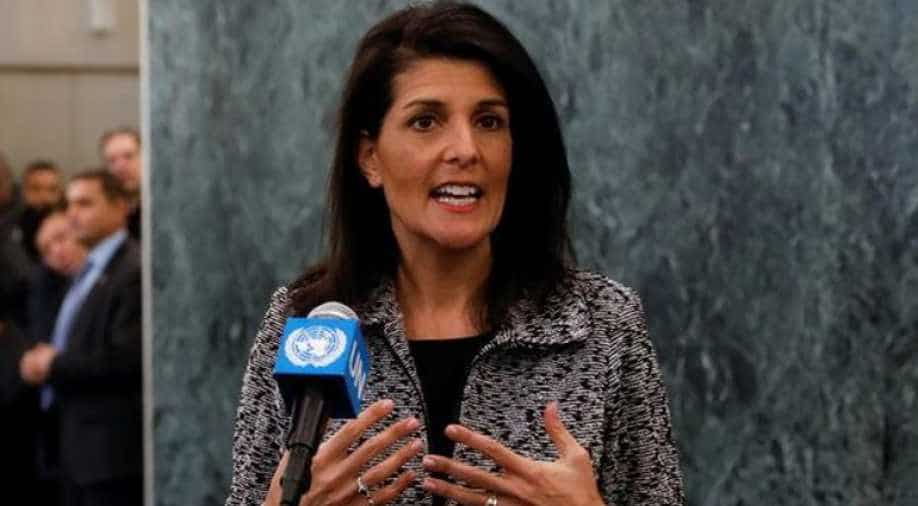 'We have confirmed that Iran did have a medium-size missile launch testing on January 29, on Sunday. This is absolutely unacceptable,' Haley told reporters following a closed-door UN security council meeting. Photograph:( Reuters )

New US Ambassador Nikki Haley had requested the urgent consultations at the UN Security Council -- the first action taken by the envoy just days into her mandate.

The row comes against a backdrop of already strained relations between Washington and the Islamic republic over US President Donald Trump`s travel ban on citizens from Iran and six other Muslim-majority countries.

"We have confirmed that Iran did have a medium-size missile launch testing on January 29, on Sunday. This is absolutely unacceptable," Haley told reporters following a closed-door council meeting.

The ambassador accused Iran of trying to convince the world that "they are being nice" before adding: "I will tell the people across the world that is something we should be alarmed about."

"The United States is not naive. We are not going to stand by. You will see us call them out," warned Haley.

"We are committed to making them understand that this is not anything that we will ever accept."

Tehran has neither confirmed nor denied firing any missiles at the weekend.

Under a council resolution that endorsed the historic nuclear deal with Iran, Tehran is barred from developing missiles designed to carry nuclear warheads.

Any violation of that resolution could trigger a snapback of sanctions that were lifted under the nuclear agreement, opening up the Iranian economy to investment and opportunities. The US ambassador challenged Iran`s assertion that its missiles are not in violation of the UN resolution because they are for defense purposes and not designed to carry nuclear warheads.

"They know that they are not supposed to be doing ballistic missile testing" of anything that can carry warheads, said Haley.

The missile launched Sunday was capable of carrying a 500-kilogram payload and had a range of 300 kilometers, she said.

"That is more than enough to be able to deliver a nuclear weapon."

Earlier, Iran cautioned Washington not to push too hard.

"We hope that Iran`s defense program is not used by the new US administration... as a pretext to create new tensions," Iran`s foreign minister Mohammad Javad Zarif told a press conference in Tehran.

"We have always declared that we will never use our weapons against others except in our defense," Zarif added, with French foreign minister Jean-Marc Ayrault at his side.

He slammed the new US administration`s "shameful act of denying entry to people holding legal visas" for the United States.

The European Union, which helped broker the landmark nuclear deal between major powers and Iran, had appealed to Tehran to refrain from activities such as the missile tests, "which deepen mistrust".

Ayrault said France had made clear its disquiet over the missile tests, calling them "contrary to the spirit" of the Security Council resolution

Britain maintains that the test is "inconsistent" with UN resolutions, but has not declared the launch to be a violation.

But the diplomatic push by the West quickly ran into trouble as Russia said a missile test would not breach the UN resolution.

Moscow, which is fighting alongside Tehran`s forces in Syria, said the demand for emergency talks at the Security Council was aimed at "heating up the situation".

The Security Council requested a report on the missile launch from UN Secretary-General Antonio Guterres and from a committee set up after the council endorsed the Iran nuclear deal, British Ambassador Matthew Rycroft said.

That report would then allow the council to determine whether the resolution has been violated and whether it should consider re-imposing sanctions.

The UN Security Council Resolution 2231, which includes terms of the nuclear accord, was adopted in July 2015.

It states that Iran "is called upon not to undertake any activity related to ballistic missiles designed to be capable of delivering nuclear weapons, including launches using such ballistic missile technology".

Russia and China have opposed discussion about a return to possible sanctions against Iran, arguing that it would jeopardize the hard-fought nuclear deal.

Trump has sharply criticized the deal between Tehran and world powers, which led to a lifting of international sanctions against Iran, and has vowed to strengthen ties with Israel, which opposes the agreement.