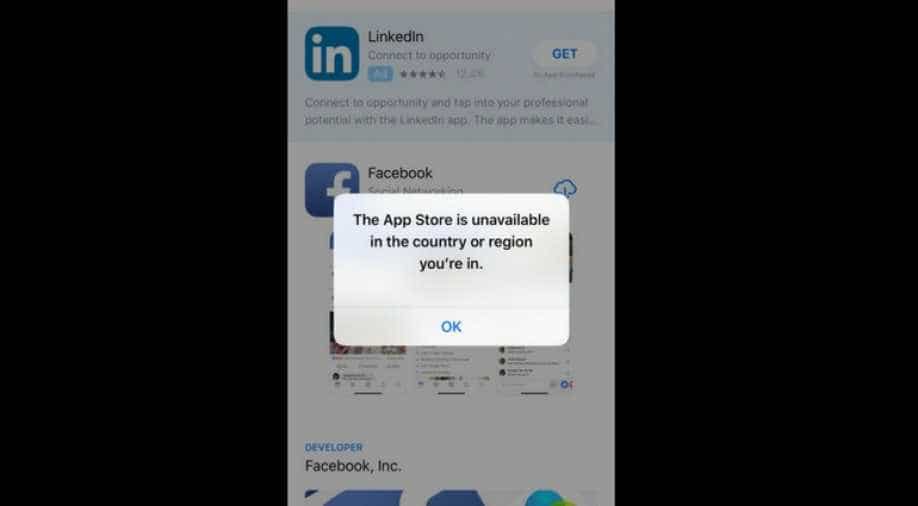 A screen grab by an iPhone user. Photograph:( Twitter )

Apple has reportedly blocked its app store access in Iran from Thursday afternoon.

What appears to be a ban, users are not able to install or uninstall any application, instead, the screen shows a message saying 'the App Store is unavailable in the country region you're in' on their screen.

The app store restriction is IP address based as users have reported using the app store through virtual private network (VPN).

A tech support site Bleeping computer also quoted a researcher in their report saying that he was only able to access app store through VPN.

Apple has not issued any official statement regarding the restricted access.

Apple already does not sell its products in Iran due to US-imposed economic sanctions.

People import their iPhone from other countries.

Being a US company Apple has restricted its access in other ways in the past.

In 2017 all apps made by Iranian developers were removed from the store.

@AppStore why is Iran blocked from the list of countries able to download or update the applications which are available for all the world?We are also human and we pay for your products. We should be able to use App Store!

So @Apple officially did it finally ;( pic.twitter.com/NboTdPoFpC

I really feel sorry for @Apple's decision to completely #ban #Iranian users from the #Appstore. We are humans and demand #EqualRights. @AppleSupport #Iran #Apple #StopTheBan pic.twitter.com/VWwPfo9TxF

.@Apple what is the problem here? Your customer is not the Govt of Iran it is the people, the citizens of Iran. Why are you diss-ing them? All your customers, world-wide, feel this in a very negative way. Has the Persian customer done "bad" to you?https://t.co/YU5FA7ckqi

Outrageous move from @apple to totally block @AppStore in #Iran. Steve Job believed that "Man is the creator of change in this world. As such, he should be above systems and structures, and not subordinate to them." For @tim_cook this excludes Iranians. https://t.co/Nwkx0Z9Mvl