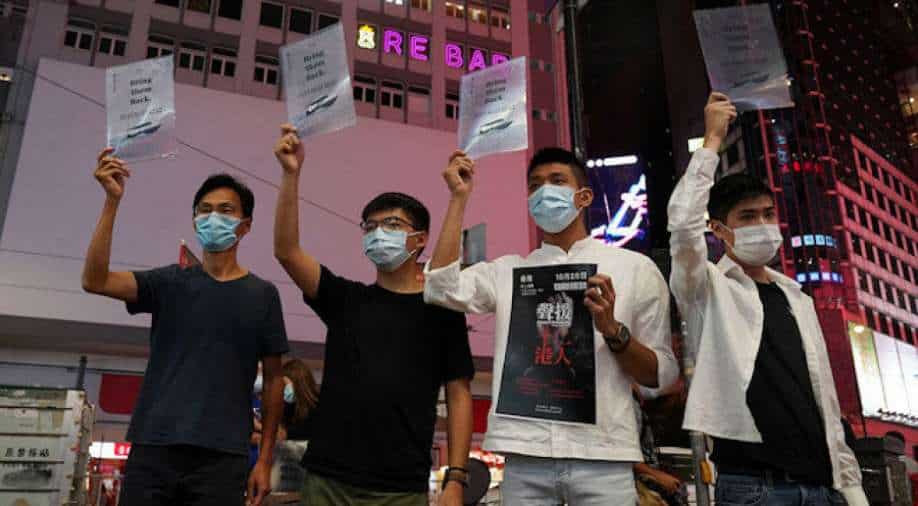 Hundreds of people marched in Taiwan's capital to demand the release of 12 Hong Kong anti-government protesters who were arrested by mainland Chinese authorities in August.

The 12 were allegedly traveling illegally by boat to Taiwan when Chinese authorities detained them. They were also reportedly suspected of committing crimes including manufacturing or possessing explosives, arson, and rioting in Hong Kong.

Many demonstrators wore black shirts, with some holding signs demanding "immediate release" for the 12 and others waving yellow umbrellas, a symbol of Hong Kong's pro-democracy movement.

In the crowd in Taipei on Sunday were activists from several Taiwanese organizations, as well as other residents of the self-ruled democratic island and many Hong Kongers.

#BringThemBack #SAVE12 at United Nations Office at Geneva.

Thank you for all my friends who came to the London rally yesterday in support of the #save12hkyouths campaign. Really thrilled to be able to give a speech in Cantonese to our beloved Hong Kong people again.
Some also vowed their support to #StandWithThailand. Democracy prevails pic.twitter.com/sf2jH86doQ

Hong Kong leader Carrie Lam has said the 12 would have to face justice in the mainland and that her government will provide them with "needed and feasible" assistance.

Ten of them were on bail and not allowed to leave Hong Kong.

Taiwan shares with the Hong Kong protesters a deep antipathy for Beijing, which considers Taiwan its territory and has never renounced the use of force to bring the island under its control.

Taiwan President Tsai Ing-wen in May became the first government leader globally to pledge measures to help Hong Kong people who leave due to what they see as tightening Chinese controls.

This, however, has further strained Taipei's already poor ties with Beijing, which has ramped up military activities near Taiwan.