Gulf in living standards at heart of UK election battle 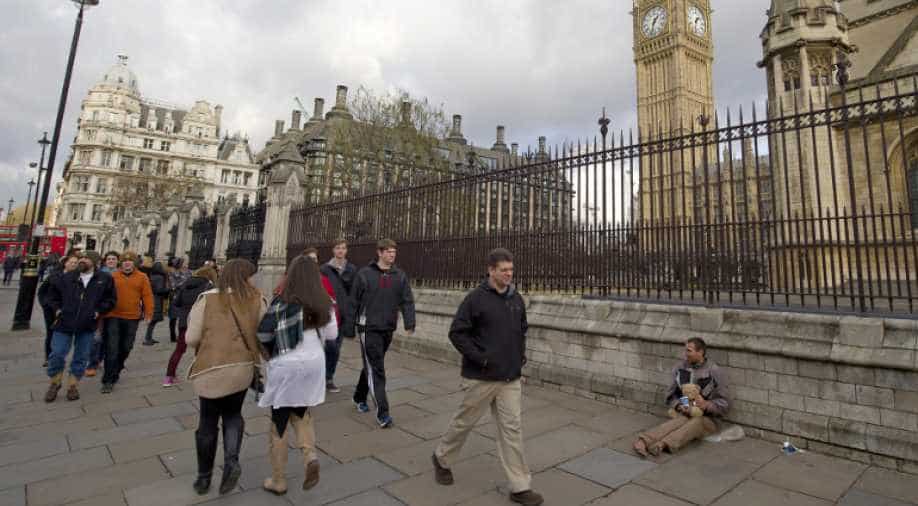 According to the Office for National Statistics, 6.5 per cent of the British population, or 3.9 million people, was living in poverty in 2014, the most recent year for which data are available. Photograph:( AFP )

Widening living standards is a hot topic in the general election due to be held on June 8||||Britain's unemployment rate sits at a 42-year low of 4.6 per cent, many workers find themselves on low wages and short-term contracts||||Median household income stood at ?26,300 (30,100 euros, $33,700) in the year to March 2016, just four per cent above the pre-financial crisis value of ten years ago

Although Britain's economic growth is ticking along in the run-up to the general election, flat wages and the government's austerity programme continue to bite and cause anger among those left behind.

A world away from the glistening skyscrapers of London's City finance district, normal life for some resembles that depicted in last year's Cannes winner "I, Daniel Blake".

The British film's protagonists, in the northeastern English city of Newcastle, battle with the impact of cuts to social services in place since 2010, struggling to make ends meet and relying on food banks.

Widening living standards is a hot topic in the looming general election due June 8, and one that analysts say played a crucial role in last year's shock referendum vote in favour of the country's exit from the European Union.

The Brexit verdict has been framed by some commentators as a reflection of the social divide between the haves and the have-nots in one of the world's richest economies.

Conservative Prime Minister Theresa May, who called the general election to strengthen her hand in the coming Brexit talks, claims she wants a society that works for everyone, albeit one that is not free of austerity nor social spending cuts.

Jeremy Corbyn, leader of the main opposition Labour Party and who has gained ground in recent opinion polls, argues that the yawning gap between rich and poor needs to be addressed.

While official statistics show that Britain's unemployment rate sits at a 42-year low of 4.6 per cent, many workers find themselves on low wages and short-term contracts.

Statistics also show that income inequality in Britain has actually declined slightly since the 2008 crisis, reversing a sharp increase in previous decades, as higher-income households saw their earnings fall more in real terms.

However, the statistics mask the disproportionate effect of income stagnation on the lowest earners, with the Resolution Foundation, a think-tank, warning that inequality in living standards could reach levels not seen for 30 years.

Meanwhile the Equality Trust states that in 2017, the country's 1,000 richest people will together own more wealth than that held by 40 per cent of the poorest households combined.

"Record numbers of people visited food banks last year, millions are locked out of a decent home, and two-thirds of children in poverty are in working households," Equality Trust's executive director Wanda Wyporska said this month.

According to the Office for National Statistics, 6.5 per cent of the British population, or 3.9 million people, was living in poverty in 2014, the most recent year for which data are available.

To survive, many Britons, especially the youngest, have to take on more than one low-paid and often low-skilled job at a time, scrambling in what is often called the "gig economy".

At the same time, the number of so-called "zero hour" contracts is breaking records at 900,000 jobs. Such positions guarantee neither a number of hours to be worked nor a fixed rate of pay.

As a direct consequence, the TUC union calculates that over the last seven years, UK wages have not kept pace with inflation -- the longest period of time since the 1870s.

"British workers have endured the longest pay squeeze since Victorian times," said TUC General Secretary Frances O'Grady. "And now even more pain is on the horizon."

Ahead of the election, May has vowed to improve workers' rights, cap energy prices, lift minimum earnings and raise the threshold at which income tax is paid.

But she has been forced to reverse a manifesto commitment on capping social care costs following heavy public criticism and opposition from within her Conservative Party.

His critics say Labour has not properly assessed the cost of those proposals.