France is split over plans to ban virginity testing, with some campaigners calling the procedure barbaric and others warning of violent repercussions for some Muslim women.

Women in at least 20 countries are subjected to virginity tests, sometimes by force, as families, lovers, or potential employers use them to assess their virtue, honour, or social value, according to the World Health Organization (WHO).

In Europe, the tests are issued in Belgium, the Netherlands, Britain, Sweden, and Spain, according to the WHO.

Virginity tests in France are most commonly used by Muslims and also by some Roma families who want proof of virginity pre-wedlock. 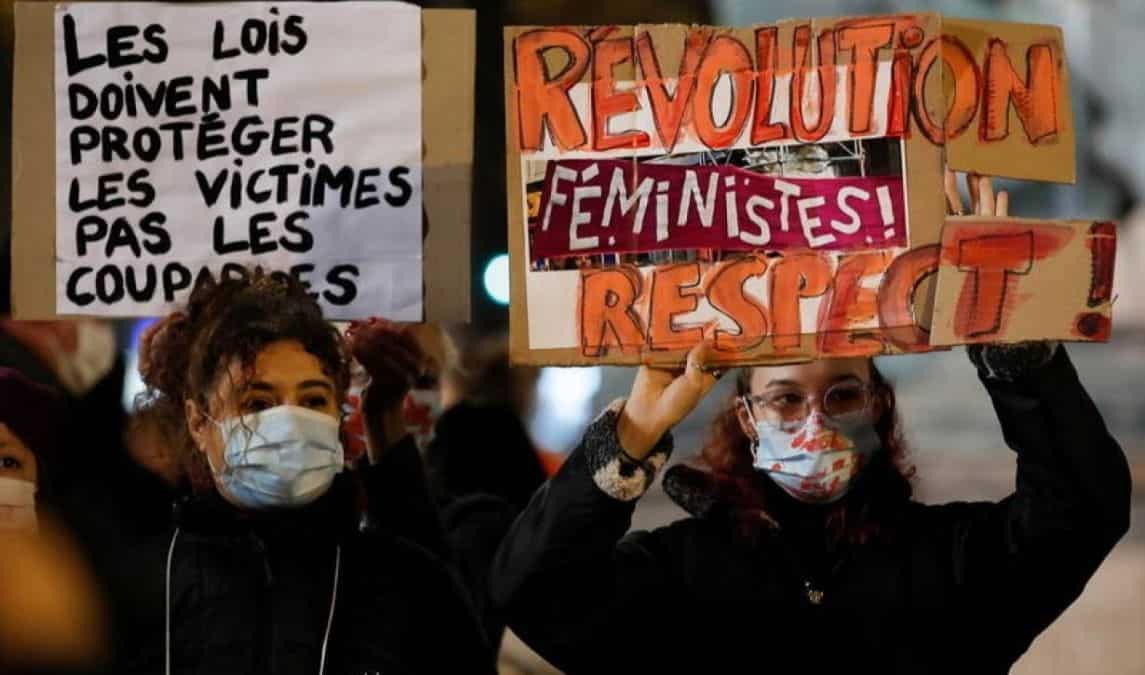 In picture: Women protest in France against virginity testing/Reuters

The United Nations says the test is painful, inaccurate, and a violation of human rights, with no place in modern society.

But not everyone agrees, with some experts predicting unintended fallout from France’s proposed ban, which is part of a wider Islamic separatism bill due in parliament next month.

“Penalising doctors is to close the only door for patients, where they could have found help and advice,” said Ghada Hatem-Gantzer, a gynaecologist in Paris and chief medic at the Maison des Femmes, a local women’s violence shelter.

“It is undoubtedly promoting a black market for certificates that dubious pharmacies will charge dearly for,” she added.

Before issuing a virginity certificate, a doctor usually inspects a woman’s hymen – the thin tissue that may partially cover her vagina – checking for tears or measuring the opening.

It is not clear how many tests are carried out each year, but doctors say they mostly check teenaged girls or young women, often under family pressure.

“There is no data, either official or unofficial, on the number of requests for virginity certificates,” said Martine Hatchuel, another Paris-based gynaecologist.

“Personally I have around two to four requests per year…almost always very young girls brought by their mothers.”

Doctors say single women fear rejection if they cannot show a certificate to families where traditional gender expectations hold sway when it comes to sex before marriage.

“Their motivation is always: ‘it is my parents/my step family/my in-laws who demand it, if it were up to me I wouldn’t ask for anything,’” said Hatem-Gantzer.

But she said the girls and young women who came to her were unanimous in declaring: “‘I don’t want to stay an old maid.’”

The French government does not collect such data but think tanks and statistical groups say France has Europe’s largest Muslim minority: about 5 million or 7-8 per cent of the population.

“If you want to deal with this issue then women must be taken care of, not prevented from having a piece of paper they need to save their lives,” she said.

Under draft legislation, President Emmanuel Macron is proposing a year in prison and a 15,000-euro ($17,875) fine for any medical professional who issues a virginity certificate.

The rules are part of legislation aimed at reinforcing secular values and fighting what Macron calls an “Islamist separatism” that he said threatens to overrun some communities.

France’s interior and health ministries were not available for comment.

While not in favour of the tests, doctors and women’s rights groups worry that some girls and women might fall victim to abuse without a certificate to attest to their virginity.

“In certain extreme situations, the only way out for women is to break up with their family or to turn to the virginity (testing) market,” the French abortion advice group ANCIC said in a statement.

“Professionals need to make the choice that seems the most ethical to them,” the association said.

In an open letter to a French newspaper, a group of 10 doctors called the tests barbaric, backward and sexist.

But they said that banning them could be still worse if doctors fear women might be at risk without their certification.

“To prevent that (test being carried out) would be a disservice to the cause of the patient,” they said.

Better education would do more than a ban to end traditional gender constraints, said ANCIC, the abortion group.

Punishing doctors does not address the root cause - fear and ignorance in Muslim communities, said the group of doctors.

Claudia Garcia-Moreno, the WHO’s lead on Violence against Women, agreed, saying “culturally sensitive” education must go hand in hand with any ban to prevent tests from going underground.

“It needs to include women and girls understanding their rights and protections,” she said.

For Hatem-Gantzer, who sees the fallout from virginity fights first hand at her Paris shelter, a ban will not quickly change such deeply-entrenched attitudes.

“Our only way out is to educate young people relentlessly and to meet their parents to convince them. It’s more tiring and expensive than banning, but it’s more effective,” she said.