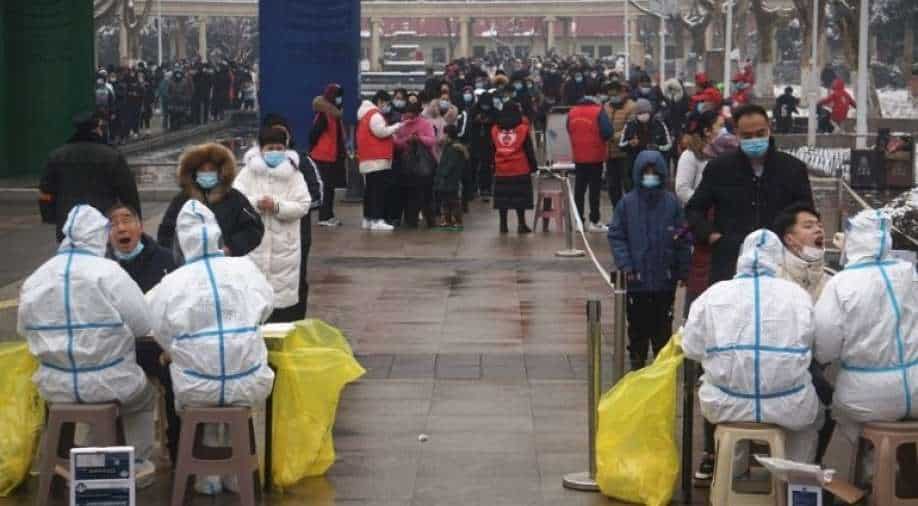 To curb outbreaks, China uses 'dynamic zero' formula: tight lockdowns and immediate mass testing. In contrast to other places where lockdowns are softer, people in China may be forbidden from leaving their buildings or confined to their rooms if they are deemed high-risk contacts. Photograph:( AFP )

A pregnant Chinese woman who miscarried after being denied access to medical treatment due to the COVID-19 lockdown has reignited debate over the limits of China's zero-tolerance approach.

China, where the coronavirus was discovered in 2019, is among the last places still adhering to "Zero Covid", putting millions of people in quarantine even as it prepares to host next month's Winter Olympics.

Let's take a look at the 'Zero Covid' policy and its ramifications.

What is 'Zero Covid'?

The Chinese government reports that through this policy it has managed to contain more than 30 outbreaks of COVID-19, including some that were caused by the more contagious delta variant. There are strict measures in place to keep the infection from spreading, including mass testing, lockdowns, and extensive quarantines.

How is China maintaining 'Zero Covid'?

In contrast to other places where lockdowns are softer, people in China may be forbidden from leaving their buildings or confined to their rooms if they are deemed high-risk contacts.

The city of Xi'an, home of the famed Terracotta Warriors, was shut down in December after 150 cases were reported, forcing its 13 million residents indoors.

One incident that can be called extreme occurred in the similar-sized city of Zhengzhou where all residents were tested after just 11 cases.

International flights are a fraction of their pre-pandemic levels, and arrivals are subject to strict quarantine for weeks.

As a result of mandatory track-and-trace applications, close contacts are usually discovered and quarantined quickly.

Does the strategy work?

Just over 100,000 cases have been logged in China since the pandemic began, a fraction of the one million cases logged by the US in one day earlier this month.

Officially, fewer than 5,000 people have died.

While it is widely believed that the initial outbreak in Wuhan in early 2020 was under-reported, life has largely returned to normal since then.

"There is still no ability to stop single local cases from appearing, but we have the ability and confidence to quickly extinguish the outbreak when a local case is found," Liang Wannian an official with the National Health Commission told reporters last month.

What is the cost of 'Zero Covid' and who pays it?

Yes, "Zero Covid" comes at a price. There have been almost constant lockdowns near Myanmar's border, and businesses have been forced to flee from these areas.

Communities that have been locked down have complained of inadequate food supplies, medical care, and supplies.

In the meantime, onerous travel rules and restrictions have left migrants separated from their families for months.

In many cases, enforcement has been heavy-handed. One incident that had sparked outrage, had quarantine staff beat a Corgi to death after its owners were quarantined.

Even though China is the only major economy to grow in 2020, repeated factory and business closures are contributing to the country's slowdown.

Is China ever going to reopen?

Ben Cowling, an epidemiologist at Hong Kong University, says that "China certainly has shown it is feasible to continue the zero Covid strategy almost indefinitely."

March 2020 marked the country's effective cut-off from the world. Foreigners have practically been forbidden entry.

Although restrictions on travel have eased slightly since then, international tourism remains non-existent. The government has said it will not renew Chinese passports until a valid reason for travelling has been provided.

The country is unlikely to reopen until after the upcoming Winter Olympics and Paralympics in Beijing, with the government desperately guarding the capital and tightening restrictions ahead of the Games.

What about the Chinese who don't agree with this strategy?

There has been a nationalistic backlash against those who question "zero Covid."

Zhang Wenhong, a noted Chinese medical expert, opined in July that countries must "learn to coexist with the virus", which prompted online attacks from trolls.

In the event that China opens up, what will happen?

There are conflicting opinions.

Researchers at Peking University say China is at risk of suffering a "colossal outbreak" if restrictions are relaxed to the same level as in Europe and the US.

Hung predicts that Covid will be similar to influenza in this scenario.

However, allowing the virus in could be risky for Xi Jinping, who is vying for a third term in October after he billed himself as a leader who would keep China safe.

"When it does come, the transition may not be easy because Chinese society has gotten quite used to a low level of transmission," says Thomas Hale of the University of Oxford.